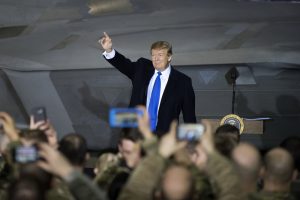 A few hours after the Mueller report was made public, we went to a Fred Meyer parking lot in Midtown Anchorage to ask Alaskans what they think of it, and whether they care.

“I’m not very interested,” said Mary Anne Wivholm, heading into the supermarket, “because I think it’s … consumed the whole country for the past two years, and that the results are exactly what a lot of people thought they were.”

So he actually read the report?

Jeanne Smith was following news of the report and said it upset her.

“I’m disappointed in Mr. Mueller,” Smith said. “I felt like he could have been a knight in shining armor that could have brought our country together around integrity and the rule of law. And the opportunity – I hope it hasn’t been lost. But it’s going to spin now.”

Gerald Atha supports the president and said Mueller lives up to his reputation as a good man.

“I tell you what I think. I think it’s all B.S.,” said an elderly man who goes by his nickname, Punch. “They’re wasting time fighting one another and not getting anything done.”

The Mueller report was not top-of-mind for Jim Chaliak.

“Which report? … Oh yeah, the probe (into) the president,” Chaliak said. He said he wants to see Trump and other officials held to account, but he doesn’t expect it. “Election cycles come and go. So, this little piece of information will be helpful, for, I hope, many of our voters to make better decisions in the future.”