The Anchorage Democrat was 72.

Gruenberg gained bipartisan respect for his skill in crafting legislation.

Gruenberg was born and raised in San Francisco. He was an Eagle Scout.  And he served in the U.S. Navy in Vietnam. 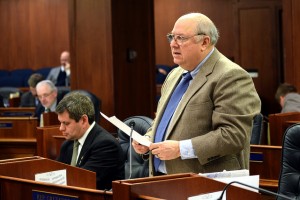 Another Gruenberg law requires the removal of asbestos from schools and public buildings.

Gruenberg served twice as the House majority leader. He was the minority whip in the current session.

Walker said Gruenberg’s death is a significant loss for all of Alaska.

Andrew Kitchenman is the state government and politics reporter for Alaska Public Media and KTOO in Juneau. Reach him at akitchenman@alaskapublic.org.