Buried deep in the October 2004 supplement of the Alaska Administrative Code are a few sentences a lot of Alaska health care experts are talking about right now. It’s called the 80th percentile rule. It was adopted as a consumer protection measure, but insurers say  it’s encouraging excessive prices for specialty care. 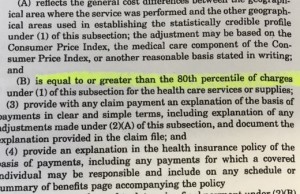 Imagine this: Your knee feels funny so you make an appointment at an orthopedic clinic. The doctor isn’t in your insurance network — so you know you may have to pay extra. But when you get the bill in the mail, you see your insurance covered only half of the cost. The clinic expects you to pay the rest.

State insurance director Lori Wing-Heier says more than a decade ago, Alaskans were calling the state with some version of that problem.

“The division was receiving several complaints that a consumer would have their bill paid from the insurance company and then get a bill from the provider and they were very surprised at the amount that they still owed,” she says.

So in 2004, the division adopted the 80th percentile rule. It requires insurance companies to pay 80 percent of the reasonable market rate for a health care service. On an insurance statement, you may have seen this called a UCR for ‘usual, customary and reasonable rate.’ Insurers calculate that rate twice a year after surveying the market.

But in Alaska, that market is small. Even in the state’s largest city, Anchorage, most specialties have only one or two provider groups.

Jeff Ranf is an employee benefits consultant with the company USI in Anchorage. And because the market is so small, he says the 80th percentile rule essentially allows specialists to name a price that insurers are then required to pay.

“Every year that providers continue to raise their rates, all they’re doing is bumping up that 80th percentile. There’s nothing holding them back, in other words,” he says.

A 2011 report by the actuarial firm Milliman pointed to the 80th percentile rule as a factor driving up health care costs in the state. The report said Alaska is the only state in the country with this type of regulation.

The largest health insurer in the state says its time to repeal the rule. Premera Alaska wants to negotiate for lower prices with providers and increase the number of doctors in its network. But Premera Alaska President Jim Grazko says the 80th percentile rule makes that difficult.

“There’s not any real reason for some of these providers to come to the table and want to negotiate if they’re going to be paid close to billed charges anyway. So I think it would provide an immediate fairly high-impact incentive for providers to want to contract with payers,” he says.

The two largest orthopedic clinics in Anchorage — Orthopedic Physicians Alaska and Anchorage Fracture and Orthopedic Clinic — don’t contract with any insurer. They both declined to comment for this story.

No neurosurgeons in Anchorage contract with insurers either, according to a director at one of the clinics, who didn’t want to be identified. She said contracting with an insurer would mean “betraying the system of trust between doctors” because it would lead to lower reimbursement for the specialty.

Dr. Stanley Watkins is President of the Alaska Heart & Vascular Institute in Anchorage. They are the only heart clinic in the city, but Watkins says they contract with Premera so patients don’t have to pay out-of-network fees.

“Being in-network with a provider makes a huge difference for patients so we’ve been actively trying to contract with all the major insurers in Alaska,” he says.

Watkins says the Heart Institute is working to make a deal with Aetna too. He acknowledges prices are high for specialty care in Alaska. A second 2011 Milliman report shows insurers paid an average of $153 in Washington state for a cardiac stress test compared to $589 in Alaska, almost four times as much.

“The prices are probably going to have to go down up here,” he says.

Watkins cites a lot of different reasons for the high prices. He says one big factor is that the Heart Institute has to pay higher salaries to convince doctors and other providers to move to Alaska. The clinic has been trying unsuccessfully for years to recruit more cardiologists.

Watkins worries if prices are too low, specialists will leave the market and Alaskans will be forced to fly to Seattle for specialty care.

But he says the Heart Institute is committed to lowering costs.

“Since I’ve been here, it’s been a thing for me to try and streamline our organization to get where we can be delivering care at just a cost of living adjustment compared to the Lower 48. But we have a ways to go and you can’t do it overnight,” he says.

Watkins acknowledges the 80th percentile rule is probably contributing to the higher prices in Alaska.

Alaska’s insurance director, Lori Wing-Heier isn’t so sure. But she is open to the idea of getting rid of the regulation.

“But we’ve got to be assured that it’s the right thing to do for consumers, that the bills are going to be paid and that it’s not going to impact rates in a negative way,” she says.

Eliminating the rule wouldn’t require a legislative fix. Wing-Heier could make the change on her own after a public hearing.

This story is part of a reporting partnership between APRN, NPR and Kaiser Health News.