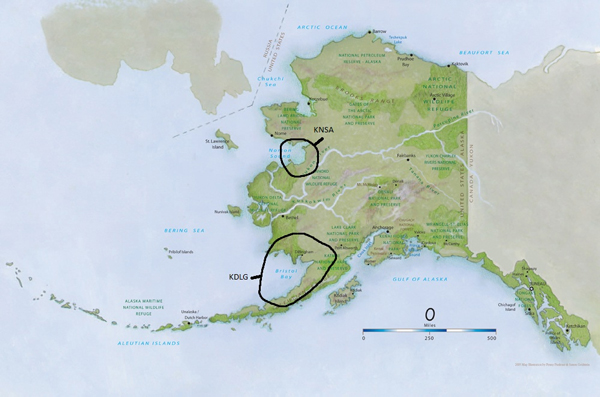 Public radio and TV in Alaska could lose $2.5 million next year if a proposed state budget cut goes through. It would be a small reduction compared to the overall deficit legislators need to close — but it would eliminate more than half of the fundingpublic media gets from the state.

As lawmakers try to spare towns with only one source for broadcast information, that distinction might not be so easy to make.

In Dillingham, KDLG shares the airwaves with a commercial station and a few religious broadcasters. But once you get outside town, general manager Rob Carpenter says his public AM station is the only one on the air for miles.

“We are in the center of the Bristol Bay region of Alaska,” he says. “Our broadcast area is roughly the size of Ohio.”

It spans most of Bristol Bay’s 25 villages, and the areas in between, where residents travel to hunt and fish off the grid.

“We do messages to people who don’t have any other form of communication,” Carpenter says. “We’re the only one that can provide weather for the region, and there’s a lot of areas that are very remote, where there’s cabins and stuff where they can get no other signal.”

But KDLG isn’t technically a sole service station. According to the Corporation for Public Broadcasting, that would have to be “the only primary broadcast service — radio or TV, commercial or noncommercial — within a 50-mile radius from the station’s transmitter.”

There’s only a handful of stations that fit that description in the whole country, and most of them are in Alaska. KUCB is one of them.

The state is hoping to spare sole service stations from major budget cuts. Tyson Gallagher is a staffer for Wasilla Republican Lynn Gattis, who proposed the 59 percent reduction for public broadcasting in the state House. If it goes through, Gallagher says they still want to make sure all Alaskans have access to information on the air.

“And so with our intent language, we’ve asked the Department [of Administration] to basically do their best to hold harmless those communities that have only one source of broadcast, being public broadcast, and look at a reduction of service of places that have duplicative services, first,” he says.

That could include the ability to stream radio online, which isn’t always possible in rural areas with slow connections.

Ultimately, it’s going to be up to the Alaska Public Broadcasting Commission to implement any cuts. Brenda Hewitt has been on that board for 10 years. She says losing funding would likely lead stations to cut staff, and that could mean less local news content and original programs.

“You know, you could just put repeaters in every nook and cranny,” Hewitt says. “And then you would have to rely on maybe just national programming and national news, and you’d have one person there that would turn the light switch on and the knobs on and that would be it.”

Some of Alaska’s smallest public radio stations already rely on larger neighbors to help to fill out their daily broadcasts. KCUK in Chevak, for example, repeats programming from Bethel’s KYUK.

Though Bethel is home to more than one radio station, KYUK is the only broadcaster reaching thousands of people in villages across the Yukon-Kuskokwim Delta. It broadcasts in English and Yup’ik, providing services like travel warnings about the freeze and thaw of the Kuskokwim River.

“If people in Anchorage or any other urban area can imagine, it’s like someone needing to tell you whether or not you can drive on the roads that day,” says KYUK’s programming director, Shane Iverson.

Budget cuts and layoffs in Bethel would have a ripple effect, Iverson says, since his station shares local news with others across the state.

That’s why Brenda Hewitt, the public broadcasting commissioner, says it’ll be hard to separate the Alaska Public Radio Network’s rural and urban stations in trying to dole out cuts.

“We need everybody,” Hewitt says. “The small stations are the ones that give us the boots on the ground. They can send us the stories that we wouldn’t otherwise hear when you’re in urban Alaska — and we are a whole state. I mean, we’re not just Anchorage, Fairbanks and Juneau.”

Juneau’s public radio station, KTOO, is part of a Southeast consortium called CoastAlaska, which covers about every size of media market Alaska has to offer. Executive director Mollie Kabler says the network has recently started selling its fundraising expertise to rural stations, including KUCB.

“It’s a fee-for-service arrangement, and it’s worked out great, because we know how to do the business of public media, and stations that are small … have just worked with us directly to do that,” Kabler says.

It’s just one way she says stations are trying to build up listener support and consolidate resources. As state funding declines, Kabler hopes that kind of change will help the whole system stay afloat.

Annie Ropeik is a reporter for KUCB in Unalaska.