On the campaign trail, Bill Walker made expanding the state’s Medicaid program under the Affordable Care Act one of his top priorities. He said he could make the decision without input from the state legislature:

“It’s up to the Governor to accept that.”

But when Walker takes office next month, will it really be so easy to expand a program that has been a tough sell in other conservative states?

Medicaid expansion would allow around 40,000 low income Alaskans– mostly childless adults, to receive health benefits. The federal government will pay 100 percent of the program until the end of 2016. After that, the state’s share will slowly increase to 10 percent by 2020. Walker has said the decision is a no-brainer, at least while the federal government is providing full funding. 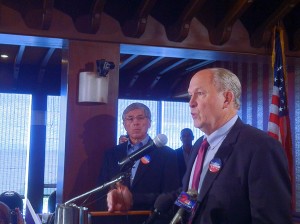 Medicaid expansion has the support of a long list of organizations in Alaska including the Alaska Chamber of Commerce, the Alaska State Hospital and Nursing Home Association and the Alaska Native Tribal Health Consortium. But does Governor-elect Walker need support from state lawmakers too?

So far 28 states have implemented Medicaid expansion. Laura Snyder with the Kaiser Family Foundation has been tracking those decisions across the country. She says most states that have approved the program, have had legislative support:

“There have been a few states where the governor has acted on his own through executive authority, but most states have generally incorporated it into state budgets which usually require legislative sign off.”

According to the state department of health and social services, Governor-elect Walker can make the initial decision on his own, but he’ll need funding from the legislature. Even though the federal government covers 100 percent of Medicaid expansion through 2016, the state has to pay some administrative costs. That will add up to between three and ten million dollars per year, according to two separate reports (from ANTHC and The Lewin Group) that analyzed the potential impact of Medicaid expansion in Alaska. And those millions could be a tough sell for the Republican controlled legislature:

“I’ll need to know the number of lives that benefit and what those benefits include. And then the future costs to the state of Alaska.”

Anna Fairclough is a Republican Senator from Eagle River. She also co-chairs the Senate finance committee. Fairclough says Governor-elect Walker will have to make a strong case to convince lawmakers to approve any new spending as they work to trim the state budget. But she plans to keep an open mind about Walker’s push for Medicaid expansion:

“It will be a lively debate. But I look forward to work with him to the best of my abilities within the financial constraints that this state is currently facing.”

One of the legislature’s biggest advocates for Medicaid expansion thinks lawmakers will ultimately see the benefits of the program. Senator Hollis French, a Democrat from Anchorage, vacated his seat this year to run for Lieutenant Governor and won’t be returning to Juneau. French expects some grumbling in the legislature over the issue, but thinks ultimately lawmakers will see it as a win for the state.

“I think you had a governor pushing down on his commissioners to make the strongest case possible against expansion. Once that changes, once you have strong numbers coming from credible new commissioners from a new administration, it’s just going to look very different.”

French says Medicaid expansion offers a big a jolt to the state economy that will be hard for lawmakers to pass up. The Lewin report estimates the program will bring more than two billion federal dollars to Alaska’s economy by 2020, while costing the state less than a quarter of a million dollars. French thinks lawmakers will look at that benefit and decide to focus on other priorities:

“President Obama is not up for election ever again. This is a program that’s going to help thousands of Alaskans. I think there are enough moderates in the legislature to say look, ‘let’s just go ahead and take it, let’s don’t fight over this, let’s find something else to fight over.'”

If Walker is successful in approving Medicaid expansion for Alaska, it will take awhile to implement. The state’s current Medicaid program will have to ramp up to accept thousands of new applications. One federal official says it’s difficult to predict how long that will take, but estimates the program could be up and running in Alaska in under six months.

This story is part of a reporting partnership between APRN, NPR and Kaiser Health News.

A Sitka fish processor lost everything in 2020. Now it’s planning a comeback.