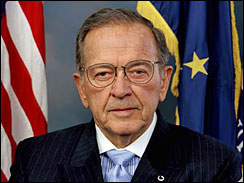 Whether they loved him or hated him, Alaskans felt the indictment of their senior Senator like a punch in the gut. Ted Stevens’ legacy is large and undeniable — he may be the single most influential Alaskan of the past half century. Can you imagine what Alaska would be like, had there been no Ted Stevens?

Join us in defining the Stevens legacy — positive and negative — on this week’s Talk of Alaska.

SUBSCRIBE: Get Talk of Alaska updates automatically by e-mail, RSS or podcast

Talk of Alaska: How Inflation is Impacting Food Security

Talk of Alaska: Recapping Debate for the State