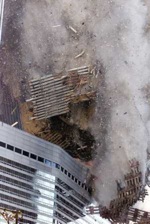 Like the rest of the nation, Alaska felt the shock of the terrorist attacks of 9/11. Air traffic halted. A recreational pilot in the interior found himself suddenly escorted by military fighter jets. A cargo jet headed to Alaska from Korea was diverted to Whitehorse. It was a Tuesday, and the public radio call-in show “Talk of Alaska” went on the air as usual, even on a day unlike any other.

Join the conversation about 9/11 and how Alaska and Alaskans have changed in the last six years.

SUBSCRIBE: Get Talk of Alaska updates automatically by e-mail, RSS or podcast.

Talk of Alaska is broadcast live statewide on the stations of the Alaska Public Radio Network each Tuesday at 10:00 a.m. Audio from the program is posted online following the live broadcast.