One Southeast school district has been raising fruits and vegetables in greenhouses, because it’s easier to get kids to eat their greens if those children have grown those vegetables themselves.

And the district powers the project with renewable energy.

An elementary class in Coffman Cove is assembled for a morning lesson. But instead of desks in this classroom, there are UV lights and row after row of raised soil beds.

This past year the school built a 6,912-square-foot greenhouse.

Wood-fired boilers feed heat into the hydroponic system. The roots of the crops sit in heated water rather than soil.

Much of rural Alaska is a desert when it comes to fresh fruits and vegetables. Not here.

“While most farmers or producers are winding down this time of year, especially in Alaska, we’re just winding up,” Beus said. “We’ve got a bunch of lettuce, kale and chard – really cool weather crops that we’ll enjoy this winter.”

It’s the second planting season for some of these students.

Eighth-grader Damon Holtman checks the acidity of the water circulating in the hydroponic system.

What’s he grown so far?

“We got like these huge blueberries,” the 6-year-old said. “They were huge but they were yummy, too.”

“If they were burning oil to maintain the temperatures in the greenhouses that would be prohibitively expensive,” said Bob Deering, the U.S. Forest Service’s renewable energy coordinator for Alaska. “Transitioning over to a low-cost, wood energy has been the enabling factor for communities to add on these greenhouses.”

The school district pays $200 for each cord of stacked and seasoned wood. That bounty on firewood has offered opportunities to under-employed families with access to a truck and chainsaw.

“By sourcing their wood from local supplies not only to you not send money out for the oil, but that money stays to pay for somebody to harvest and process the wood,” Deering said. “That guy then can afford a house, which cascades through the community.”

Prince of Wales Island is mostly covered by the Tongass National Forest.

Logging has steadily declined, yet the former logging camp and mill town communities are hanging on.

Southeast Island School District has six schools on Prince of Wales Island; a seventh closed last year because there were too few kids.

“There aren’t a lot of jobs,” district superintendent Lauren Burch said. “They’ve opened up some logging again, but on the whole, that’s someone from someplace else who lives in the camp and takes off again. I mean, it doesn’t open schools, it doesn’t bring in kids.”

The local diet on Prince of Wales Island includes a lot of meat and fish.

Store-brought produce is expensive: it’s about $5 for a head of lettuce.

“By the time the broccoli gets to our store you can hold it up and wiggle it because it’s that old,” said Priscilla Goulding, the district’s grants coordinator.

The Alaska Energy Authority has funded more than a dozen wood boilers statewide – four of them are owned and operated by this school district.

Students’ eating habits are changing now, she said, as she watches the elementary kids help themselves to the salad bar. 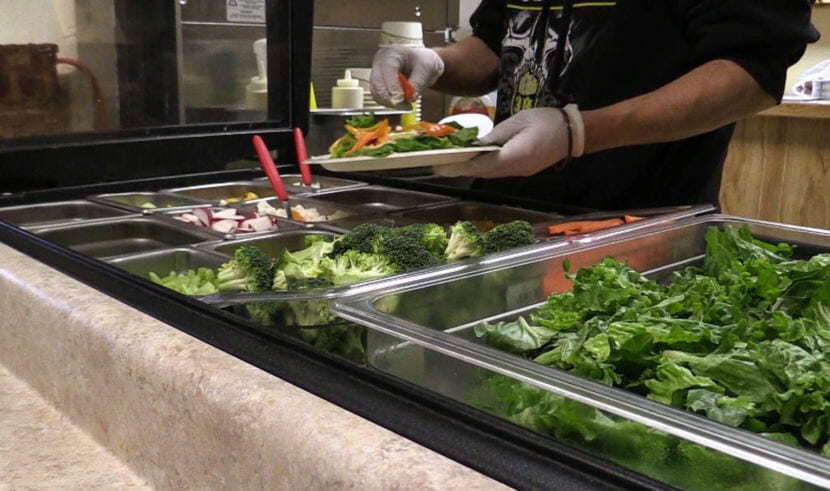 The salad bar in the school cafeteria at Thorne Bay. Vegetables from the school’s greenhouse often end up here. (Video still by David Purdy/KTOO)

“One of the cooks told me that there’s been a little fad in the first grade of broccoli with melted cheese over it,” she said a little proudly. “One kid just really loved that and the fad spread to the whole first grade.”

There have been setbacks: an outbreak of aphids devastated Coffman Cove’s summer lettuce crop.

Burch is frank about these challenges.

“You’d have 1,200 lettuce plants laying on their side and no one knows anything,” he said. “Did they put in too much of the chemical in, did they let the water supply – and whoever was supposed to be watching over the weekend never seems to know what happened.”

Running a hydroponic greenhouse has a steep learning curve.

Burch said staff and students are learning from their setbacks.

And in the meantime, the kids are eating better and working with their hands.

He offers a bit of homespun wisdom from his days growing up on a farm in Oregon.

“If the kids will grow it, they’ll try eating it,” Burch said. “I mean, they’ll try a Brussels sprout if they grow it.”

This school year will be the first full growing season for the district’s greenhouses. Surplus produce is sold to the local community; farm-to-table has come to rural Southeast Alaska.

Support on KTOO comes from thread, advancing the quality of early care and education in Alaska.

For more stories that are part of this project, visit KTOO.org/ChasingTheDream