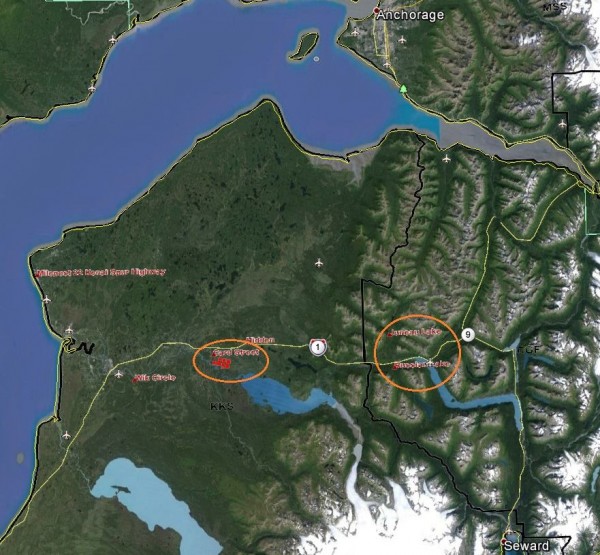 The Card Street Fire on the Kenai Peninsula has grown to more than 9,000 acres.

More ground and support personnel are arriving, and the fire has pushed east into the Skilak Lake area. The Kenai National Wildlife Refuge ordered an evacuation of all the campgrounds along Skilak Lake Road.

The Type-2 management team has arrived in Sterling and will be coordinating operations today.

According to the Alaska Interagency Fire Coordination Office west winds continue driving the Card Street fire towards the north shore area of Skilak Lake. The fire has crossed Skilack Loop Road, prompting the Department of transportation to close the road and evacuate the nearby recreation area. Suppression efforts in the area are ongoing.

The Card Street Fire has burned 11 structures and had spread to 3,000 acres, according to Terry Anderson of the Division of Forestry. The fire on Wednesday was driven by westerly winds which were pushing flames into the Kenai National Wildlife Refuge in the direction of Skilak Lake Loop Road. The area is a popular recreation area, but the campgrounds near Skilak Lake have been cleared.

The fire was moving away from residential areas on the banks of the Kenai River.

There are 175 firefighters working to put out the fire, Anderson said in a release.

Firefighters had been dispatched from the Kenai Borough, Alaska Division of Forestry, Alaska Smokejumpers, Selawik, Idaho and Montana.

Favorable winds, a lot of water and good preparation by property owners kept the damage limited to one structure Tuesday night, Anderson said.

“The fire made a major run to the west,” he said. “It jumped Kenai Keys and came into the subdivision with lots of sparks and embers and trees torching, and it was a battle for a good solid three hours or so. It was supported by air tankers dropping loads of retardants right next to houses trying to support the firefighters. A lot of success.”

Anderson said additional administrative and ground support were expected to arrive on the scene.

“There’s a lot of tired firefighters out there right now, so to be supplemented by a management team or more fire crews is what we all need right now. We have about 125 new firefighters hit the ground today [Wednesday]. More have been ordered and I expect to see more coming.”

The Federal Emergency Management Agency is putting federal money behind the effort to fight the Card Street Fire in Sterling on the Kenai Peninsula.

At least 300 people have been evacuated, mostly in the Fueding Lane and Kenai Keys areas. Hundreds of homes are potentially in the path of the fire, many of them primary homes. Three homes have been destroyed so far, ten structures in total. The fire has consumed more than 2,500 acres.

Hot Shot crews arrived Tuesday night and a Type-2 Management Team was expected to take over operations Wednesday afternoon. There are 28 uncontrolled fires within the state which has burned over 70,000 acres to date.

Fire crews were kept busy on the central Kenai Peninsula Tuesday night, keeping an eye on the Card Street Fire to prevent it from spreading to homes in the Kenai Keys areas, and attacking two new fires in the Copper Landing area.

The other is burning on the south side of the highway on a steep mountainside in the Russian Lakes area. That fire was about 20 acres when crews reached the area, but Andy Alexandrou, with the Division of Forestry, said Tuesday that the Russian Lake Fire is “gobbling” — moving fast up steep terrain near power lines, the Sterling Highway, and some residences.

No lightning strikes were recording in Sterling on Tuesday, but dry conditions and variable winds continue to hinder firefighting efforts. The Card Street Fire, which began Monday afternoon, had grown to just over 2,000 acres, or 3 square miles, by Tuesday evening. The fire has damaged or destroyed at least 10 structures in eastern Sterling, three of them houses.

Hot spots appeared across the Kenai River in last year’s Funny River Fire burn area Tuesday, but crews have been able to contain them. Air tankers continue to dump retardant as a barrier between the fire’s edge and homes, with helicopters dumping water in more targeted operations.

Residents are keeping a close eye on the fire, as well. Many have evacuated, with the Sterling Community Center serving as a shelter and hub for relief efforts. Not everyone is heeding the evacuation request, however.

Kurt and Tammy Strausbaugh stayed in their house Monday night and watched the flames come to within a half mile from their back deck.

“I’ve got a good 50-foot buffer around at least most of my home, but our home is made of wood and our deck is really kindling dry, just like everything else is right now,” Kurt said.

The Strausbaughs live about one-third of a mile down Card Street off the Sterling Highway. They had everything packed up and moved out Monday, and were ready to move themselves is need be.

“We just hunkered down. We’re so close to the highway, if the flames would have come onto our property we already had the vehicles pointed down the street,” he said. “We would be able to get out, put it that way.”

Alexandrou said that a hot shot crew was scheduled to arrive on the scene Tuesday night, and a Type 2 management team is expected to take over operations Wednesday morning.

More air support is on the way, as well, including two Black Hawk helicopters from the National Guard and a Canadian CL-215 scoop aircraft.