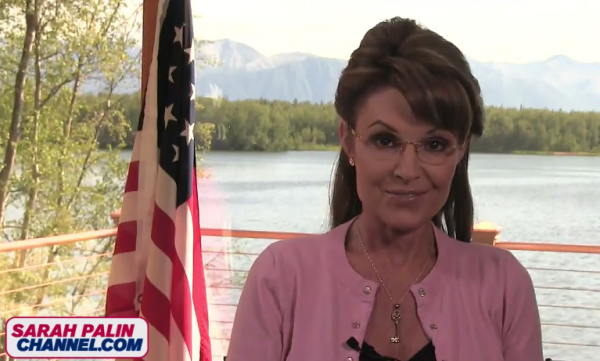 Less than a week after launching her own online subscription channel, former Gov. Sarah Palin is using the platform to call for the repeal of her successor’s oil tax law.

“Oil is our product,” Palin tells the camera. “We have every right – and a responsibility – to value it appropriately, to demand a clear and equitable share of our oil’s value.”

The video is 18 minute long, and it’s one of the few free pieces of content on the Sarah Palin Channel. As Palin sits near Lake Lucille, she reiterates that she will vote yes on the oil tax referendum appearing on the August 19 primary ballot. Proposition 1 would scrap the tax ceiling that Gov. Sean Parnell put on oil production. It would also cause the state to go back to Palin’s system — known as “Alaska’s Clear and Equitable Share,” or ACES — where the tax rate goes up along with the price of a barrel.

Palin suggests that new law came about because the North Slope producers heavily influenced Parnell and the current Legislature. She also accused the oil companies of “crying poverty” and trying to “buffalo” voters with “multi-million-dollar propaganda campaigns.”

“Any longtime Alaskan sourdough knows that’s their [modus operandi] – it’s to be expected that they’d scare Alaskans into thinking that all our jobs are at risk if they don’t get every single thing they want,” Palin says.

The “No on 1” campaign is not impressed. Spokesperson Willis Lyford says he only made it through the first few minutes of the video. He likens it to an “infomercial” on Palin’s legacy.

“She’s made noises about this in the past. ACES was her policy,” says Lyford. “So, it’s no surprise that she defends it.”

Palin only recently started talking about Parnell’s oil tax policy this summer. She remained silent on the issue when the Legislature passed the law last year.