Click to listen to the full audio story:
salmon final 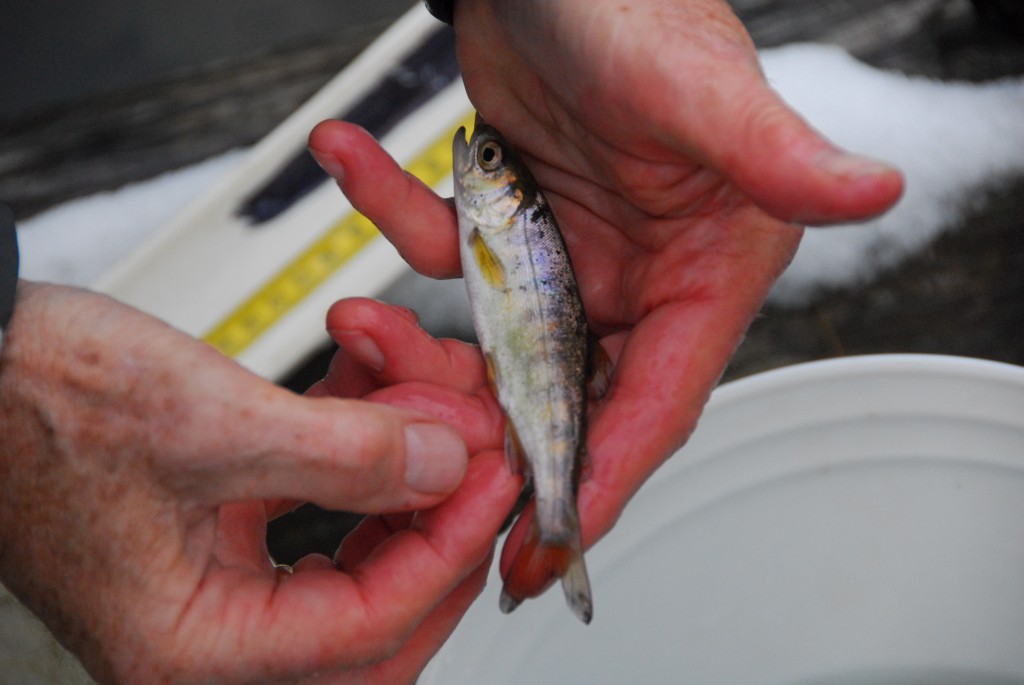 Today we’re going to school outside. Douglas Causey is a Professor of Biological Sciences at the University of Alaska Anchorage, and most days he’s teaching in a classroom like every other teacher. “This semester I’m teaching a class with about 35 students, and that would be like every class you probably took as an undergraduate,” says Causey.

But, the one he’s teaching today couldn’t be more different. This classroom is in Portage Valley. And the homework? Catching fish.

The course began last year through a partnership with UAA and the US Forest Service. Causey first prompted the Forest Service with a question: What kind of research needs to be done in Portage Valley? “From then on the class was focused on getting the skills and techniques on how to do the research, which is not unlike what professionals do in the field,” says Causey.

For that research Causey connected with Mark Chilcote, the Kenai zone aquatic Program Manager for the US Forest Service. “The idea was that we could kind of help each other out; we could get some people out in the field to get information that the Forest Service wanted and UAA could bring some students out and get some field experience. So it was a win-win situation for us,” says Chilcote.

One of those students is Maio Nishkian, and she’s thrilled to have the chance to get real field experience, while also earning some college credit. “Actually getting out and doing these things as opposed to reading it makes all the difference because you can really apply what you’re learning to real life situations, which is supposed to be what school is for right?” says Nishkian.

The project is focused on catching juvenile fish in the Portage area. The idea is to find out what kinds of fish are living there, and how those fish are reacting to factors like wintering and climate change.

“So this is a minnow trap. It’s about 12 inches long. It has fine mesh in it and it has two funnels on either end so fish can find their way into it but they can’t find their way out,” Chilcote explains, demonstrating the method used to collect the study samples.

This type of field work is nothing new, but it’s never been done in the Portage Valley. And that’s allowed the students to make some major discoveries.

“Previously it wasn’t known that Chinook, which are King Salmon, were found in this area. So that’s huge because their populations have been recently declining and now we know that these are good grounds for juvenile rearing. We want to know more about these populations and make sure we can serve these populations so they don’t decline as well,” Nishkian explains.

It’s not difficult to see why Nishkian enjoys her class; she gets to be outdoors, and occasionally break some new ground. But that doesn’t mean its been easy. Mark Chilcote says that on day one, the message from Professor Causey was clear. “I want the students to go out there and do it themselves. Don’t help them too much, let them fall in the water, let them do what they need to do, make mistakes, and they’re going to come up with some pretty cool solutions,” Chilcote says.

And that highlights one other unique aspect of this class. Nishkian and her fellow students are getting more than just field experience. They are being challenged to think for themselves. “In school too often we just have a list of everything we need to do; questions we need to answer, and the way we need to answer them. I don’t really think you learn much from that. You learn how to do what you’re told. So stuff like this really makes you a better student and a better professional as your entering grad school and onwards,” Nishkian says.

Professor Causey says that’s exactly the kind of attitude he wants his students to leave with. It’s satisfying for him, but it also encourages UAA and even other schools to put a larger emphasis on field studies and relevant research. “Our department has championed this and that’s really what’s set us apart nationally; how much involvement undergraduates have in education. I just came back from a national meeting where we talked about this class and this whole approach,” Causey says.

Nishkian will continue working on the Portage project later this year as part of a fellowship through the Alaska Climate Science Center. After that she says she’ll likely go to grad school, although she’s not certain where. She does know that this is the field she will stay in. “If it hadn’t been for Doug I never would have gotten into this project, and this has definitely solidified that I want to keep working with fish.