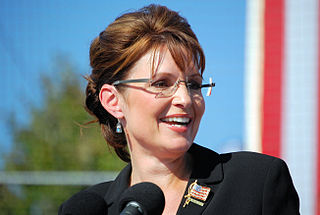 With Lt. Gov. Mead Treadwell and Tea Party candidate Joe Miller in the race, the Republican Senate primary is already being watched closely. Now, it’s gotten an extra dose of national attention with former Gov. and once-vice presidential candidate Sarah Palin saying she could be persuaded to run against incumbent Democrat Mark Begich. But while the news made a splash Outside, Republicans in the state still haven’t heard from her. APRN’s Alexandra Gutierrez reports.

October 28, 2010. That was the last time former Gov. Sarah Palin really inserted herself into Alaska politics. It was at a rally in Anchorage, and she was endorsing Republican candidate Joe Miller in the Senate race.

HANNITY: Well there’s been talk you might run for senator in Alaska. Have you considered that at all?
PALIN: I’ve considered it because people have requested me considering it.

Palin made those comments on Tuesday during a radio show with her Fox News colleague, Sean Hannity. They come after months of speculation over whether she would be open to the possibility of running, and after a national Tea Party group launched a “Draft Sarah” effort. Republicans see Mark Begich in a vulnerable spot as a Democrat in a red state, and Palin’s fans believe she’s a strong contender because of her star power and ability to raise money.

But even though her statement is generating a lot of national buzz, party leadership in Alaska hasn’t heard a peep from her. Republican Party Chair Peter Goldberg says that there’s been no communication between him and Palin. Ever.

“I would think she would want to at least speak briefly to the new head of the Alaska Republican Party. But no, never met the lady. Never spoken to her. I have seen her once.”

That was at the state convention five years ago, and his table was about 30 feet from the podium where she was speaking.

Outside of her 2010 endorsement of Joe Miller — who she could potentially face in the primary if she ran — Palin has kept a low profile in Alaska since she stepped down during her term as governor. She made a comment on Alaska’s oil tax system on Facebook in 2011, but has otherwise refrained from getting involved in state policies. She’s also had limited contact with elected leaders. Gov. Sean Parnell hasn’t spoken with her in months. Republican House Rules Chair Craig Johnson says he hasn’t communicated with her at all in his leadership capacities. House Majority Leader Lance Pruitt says he’s never met her.

Ralph Seekins is the Republican National Committeeman in the state, and of all the people I spoke with, he was the one who had seen her most recently. That was back in February of this year. She was in Fairbanks for the Iron Dog snowmachine race, but made an appearance at a Lincoln Day dinner thrown by the region’s Republican Women group.

Seekins doesn’t know of any party members who have been in touch with her recently, and he hasn’t heard of her having an exploratory committee in the state.

“Maybe she’s just trying to pique interest, or see what the response might be.”

Seekins says he’s not sure if she’s seriously considering a run, or if she would even run with his party.

“You know, we’ve heard that she’s also said, ‘Well, I might be interested in starting another party other than the Republicans.’ So, some people say, would she run as a Republican or something else? There’s a lot of just speculation, confusion, and questioning right now.”

Palin has previously clashed with the establishment wing of the Republican party, aligning herself with Tea Party supporters who attempted to — and briefly succeeded in — overthrowing the more moderate faction. With Miller and Treadwell falling on different sides of that fracture, it already looks like that ideological fight will wage on in the primary race. Seekins says if Palin jumps in, that means even more money and energy will be spent on intra-party rivalries. He’d rather that effort go toward campaigning against Begich.

“There’s a lot of us that kind of wish that it was one clear candidate. But it doesn’t look like it’s going to be that way.”

There’s one other person who hasn’t heard from Palin: me. She did not respond to a request for comment for this story.