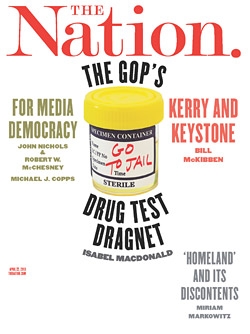 A local legislative race in Alaska has caught the attention of national media, and is being held up as model for political change elsewhere in the country.

Jonathan Kreiss-Tomkins, a Democrat from Sitka, won his seat last fall by 32 votes. Kreiss-Tomkins was 23 years old at the time. His opponent, Republican Bill Thomas of Haines, was a four-term incumbent and co-chair of the House Finance Committee.

Close elections are common in Alaska, but the April 22nd issue of The Nation calls Alaska’s House 34 race a “lesson” for the left.

The Nation magazine contributor Russell Mokhiber says he grew up in a political family, and has been a political activist all his life. The last election cycle generated a huge amount discussion about the relationship between money and politics. Much of it he considers whining.

He sees the election of Jonathan Kreiss-Tomkins as an antidote to inaction. He thinks the 24-year-old Sitkan has — by his headlong plunge into politics — demonstrated that actions speak louder than words.

“You hear a lot of rhetoric about Citizens United and corporate takeover of the country and We need a constitutional amendment, and all these big plans. Could it be that we just haven’t figured out the fundamentals of democracy? How to run for and win office, even at the local level.”

Mokhiber is solidly rooted in the left. He edits a high-end Washington DC-based newsletter called the “Corporate Crime Reporter.” Mokhiber has covered Alaskan politics before, most notably the 2006 Cruise Ship Initiative. One of the co-authors of the initiative, Gershon Cohen of Haines, was instrumental in urging Kreiss-Tomkins to make a bid for the new legislative seat recently created by redistricting. Cohen tipped Mokhiber to the potential story in Kreiss-Tomkins’ unexpected win. Mokhiber then pitched it to The Nation, the country’s most prestigious left-of-center magazine.

His subsequent piece examines several facets of the election: Kreiss-Tomkins’ home-town advantage, the name recognition of his mother, Dr. Connie Kreiss (who is well-known in the district’s smaller villages), some ways that his opponent Bill Thomas was unpopular, and Kreiss-Tomkins’ use of social media.

None of this, says Mokhiber, necessarily added up to a win.

“To me, what struck me as a bigger factor was that he went to almost all of the little towns around. He met a lot of people, and he was receptive, he was a listener — he connected with a lot of people face to face. Clearly without that, he would not have won this thing.”

Gershon Cohen agrees that voters chose Kreiss-Tomkins for reasons other than party affiliation. “This shouldn’t be about parties anymore. It should be about policies, and about the people that are going to be in government,” he says. “So it doesn’t surprise me at all that it would be getting looked at by a lot of people around the country, and frankly I think that’s great.”

Cohen was the Debate coach in Haines when Kreiss-Tomkins was in high school in Sitka. That’s when they first met.

Cohen agrees with Mokiber’s assertion that Kreiss-Tomkins won his election by making personal connections — a strategy that undermines conventional thinking about party politics in Alaska.

“I think that he would have won as an independent, and I think that there’s an opportunity for that to be replicated around the state, frankly. We had a lot of races in the last election where people were running unopposed. And people go, Well, how come someone from the other party isn’t running? It shouldn’t be about party, it should be about the people and what they support, and what they would do in office.”

In fact, there were seven unopposed legislative races last year in Alaska — one in the Senate and six in the House. In Mokhiber’s home turf of West Virginia, in the eastern panhandle, there were at least ten state house delegate seats that went unchallenged, any one of which could have been won with three-thousand votes.

He’s hoping the lesson of Kreiss-Tomkins’ election sinks in.

“We’re starting to do a recruitment drive, where we’re passing around the article, looking for people who it resonates with.”

Mokhiber is not expecting miracles. At the moment, he sees Kreiss-Tomkins as the exception to the rule in a political environment where constituents don’t always come first.

He wants people to look at this election and take heart.

“Now I think he’s a special young man in a special district. And not everybody who’s going to take this on is going to win, or even come close. But the reason it’s such a good model is because he put aside the rhetoric and he went and he listened to people. He said, Here’s my card, give me a call. If I don’t answer, I’ll call you back within 24 hours. I want to be your person in the state capitol.”

It’s river eel season on the Kuskokwim, and fishermen are lining up to catch their fill