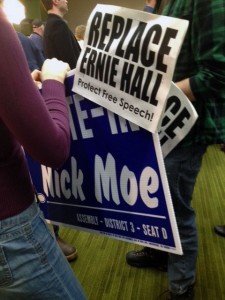 It was hit and miss for Assembly Candidates backed by conservative Anchorage Mayor Dan Sullivan in Tuesday’s Municipal Elections. And the makeup of the Anchorage Assembly seems as though it will be shifting.

“It’s amazing the amount that this campaign was able to accomplish in two weeks. And regardless of the outcome, I am so pleased. I think we sent the message that the public process should be followed, that we should have leaders that listen to us not shut us out of testimony and the public process. Regardless of the outcome, I’m very happy. It’s very encouraging to be ahead this late in the game. But we still have a long way to go both tonight and we’ll see what happens this next week or so”

Moe and Assembly Chair Ernie Hall were neck and neck, trading places for the lead all night long. At the end of the night, Hall led Moe by just 93 votes. Hall received 3,628 votes, that’s 50.65 percent, while, write-in Moe had 3,535 votes that’s 49.35 percent. 26-year-old Moe, who works for the Alaska Center for the Environment, launched a write-in campaign late in the game. He said he jumped into the race with only two weeks to go in response to Hall’s handling of AO37, a controversial ordinance that stripped municipal worker unions of power. Hall oversaw a vote of the assembly which ended a public hearing before everyone had a chance to testify. Hall said Moe’s success was due to support of unions, especially those representing fire fighters.

Six of the 11 Assembly seats were on the ballot. Chugiak/Eagle River Candidate, Amy Demboski, who was endorsed by Mayor Sullivan won her race. The paralegal who also sits on the Mayor’s city Budget Advisory Commission beat out two other candidates to replace outgoing Chugiak/Eagle River Assembly Member Debbie Ossiander. Demboski said she ran in support of the Mayor’s controversial ordinance but she’s ready to work a reconfigured assembly.

“I live in facts and data and that’s the type of decisions that I’ll make. So regardless of what the other side is saying, or what my side is saying, if you will, I will always be fair and I will always do my homework. And the facts and the data will say what they will and our community will speak. And whatever my community says that they want, that’s the direction we’ll go in.”

Assembly Vice Chair, and Sullivan supporter, Jennifer Johnston ran unopposed for her South Anchorage seat. Cheryl Frasca, the Mayor’s former budget director, who was appointed to fill the West Anchorage seat left vacant by Harriet Drummond after she was elected to the Statehouse, lost here race to Tim Steele. Steele, a former School Board member said voters sent the Assembly and Mayor a clear message.

“Well, I think it’s a message from the voters that they’re not real happy. It seems to be a change election. We’ll see how it all pans out, but I think they’re mad as heck and they’re not gonna take it anymore.”

“There’s going to be a major shift in this Assembly. I think Nick’s gonna win it. We’ll see what happens. I know Steele’s gonna win it for sure. I think the public is speaking and we’re going to listen to them. If there’s a big change [we] should reorganize the Assembly and put it back where it needs to be, where everybody who comes down to testify gets to be heard, and we’ll go from there.”

“It’s pretty exciting. You know past elections have been somewhat mundane on the assembly race, but with the write-in campaign and certainly right on the heels of what we just recently went through — a couple of weeks of pretty rancorous testimony from the public and not feeling like they’ve been heard. I think their message is loud and clear. They want to respect the public process. They want their local elected officials to listen to them.”

Mayor Sullivan blamed special interests for shifting the terrain of the election. He said they were responsible for upsetting Frasca’s race and giving Hall an unexpected run for his seat.

“Here you have again, special interests pouring a ton of money and a ton of ground support into a ground campaign against a candidate who, quite frankly, didn’t intend on raising any money. So I think it kinda put Ernie at a disadvantage, if you will. Ernie Hall is a great guy, a great gentleman, a great leader — he always tries to find consensus and I think be’s going to prevail in this race, ultimately.”

It won’t be known for a week or so whether it’s Hall or Moe who will prevail. Officials with the Municipal Clerk’s office say there are more than 22-hundred early ballots yet to be counted and an unknown number of absentee and question ballots. The write-ins don’t get counted by name unless Moe gets more votes than Hall. The Election is set to be certified on April 16th.