A Fairbanks-based trucking company is hauling dozens of massive support structures up the Richardson Highway over the next few months. The 165-foot steel girders will be used to build the Alaska Railroad bridge over the Tanana River at Salcha. Motorists who encounter the slow-moving convoys of trucks hauling the girders should drive carefully – and expect delays.

Workers at the Alaska Railroad’s Tanana River Crossing construction site have been busier than usual over the past few days, taking advantage of a break in the cold snap before the contractors building the bridge wind down work next week for the holidays.

But the pace is just picking up for a trucking operation to haul 80 enormous steel girders to the construction site that’ll be used to build the 3,300-foot bridge that when completed will be the longest in the state.

Railroad Project Director Mark Peterburs says the third convoy of big rigs carrying the girders was scheduled to arrive today, weather permitting – after the long, slow journey north from the Port of Valdez, 332 miles away.

“There are three trucks in the state that can handle those girders,” Peterburs says. “The maximum speed they can go is 25, (and) and lot of it is more like 10 and 15 (mph). And it takes them about 24 hours from the time they  leave Valdez to get here, get unloaded and get back.” 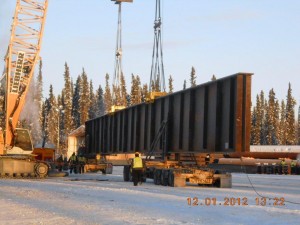 Kent Pollack is the project senior construction inspector, says Carlile Trucking had as of Wednesday delivered eight of the I-beams, each of which weighs 72-tons.
“They’re 145,000 pounds apiece,” Pollack says. “So, they’re hefty.”

At 165 feet, the I-beams are more than half the length of a football field – about as long as the big C-17s that fly out of Eielson Air Force Base.

Each convoy will include three tractor-trailers, pilot cars and other support vehicles.

Pollack says 54 girders are scheduled be delivered by February, and another 26 will be delivered after breakup.

Peterburs says the truckers will do what they can to minimize the difficulty that the long, slow-moving convoys will present to motorists. But he says there will be delays. He says motorists planning to travel on the Richardson Highway over the next few months might want to check for information about the convoys on the website for the railroad’s North Rail Extension project – that’s northernrailextension.com.

The Moose Pass man behind the plow at Trail Lake