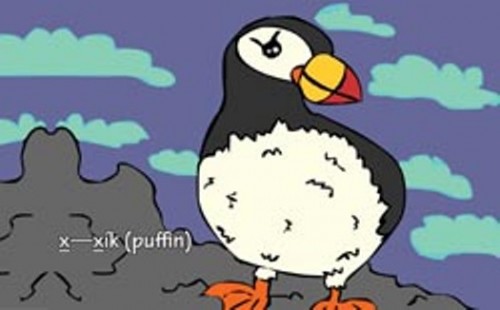 The Tlingit language includes 50 letters, including some sounds that are not found in other languages.

A new online tool, plus a note-card-and-audio system, is aimed at helping children learn the language. But it can help students of any age. CoastAlaska’s Ed Schoenfeld has more

“One of my first teachers said before you can say a sound or word you have to be able to hear that sound,” says Linda Belarde, who creates Tlingit language curriculum for the institute. “

And because they’re new to English speakers, we figured the more ways that they can have to learn and hear those sounds, it’s going to make it a little bit easier when they get into the books and try to say something,” she says.

The institute is sending alphabet-card-and-CD packages to 15 Southeast Alaska language teachers. Others can use the online version or request copies. They’re also on sale to the general public.

“We asked our artist to draw pictures that would appeal to young children. But it’s actually for any age. The sounds are new, so any tool we have for learning language is applicable for any age,” she says.

Tlingit was an oral language. The written version, developed after western contact, is made up of letters used by English speakers. The less familiar ones are depicted by combinations of those letters, plus apostrophes, called “pinches,” and underscores.

Belarde says some of those are unique.

“They look like X, so we want to say, like, Xray. But they’re not the same in Tlingit. And those are the four X sounds that are not found in any other language.”

Belardi says they may be unfamiliar to the uninitiated. But they’re easier to memorize because they never change. That’s not the case in English where, for example, a “G” can be hard – as in “goat” – or soft – as in “giant.”

The new release, titled “Let’s Learn Tlingit,” joins other Native language publications and online tools created by the heritage institute. They include Tlingit, Haida and Tsimshian dictionaries, plus phrase and spelling books.

He has also worked as a manager, editor and reporter for the Juneau Empire newspaper and Juneau public radio station KTOO. He’s also reported for commercial station KINY in Juneau and public stations KPFA in Berkley, WYSO in Yellow Springs, Ohio, and WUHY in Philadelphia. He’s lived in Alaska since 1979 and is a contributor to Alaska Public Radio Network newscasts, the Northwest (Public Radio) News Network and National Native News. He is a board member of the Alaska Press Club. Originally from Cleveland, Ohio, he lives in Douglas.