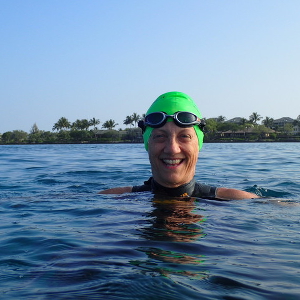 Lisa Keller was born and raised in Anchorage, Alaska.  She was 8 years old when Title IX passed and was fortunate to have parents who encouraged activity and to live in a progressive and encouraging community for girls and women in sports.  She played baseball and soccer, downhill skied at Arctic Valley, learned to swim at The Spa, hiked the Chugach, and ran the Anchorage tracks and trails.  She headed to University of Oregon, Eugene, and played soccer until she discovered the new sport of triathlon.  After earning a degree in Political Science, she quickly fell back on her life as an athlete and began a career in fitness and coaching.  She is a past winner of the Gold Nugget Triathlon and the Eagle River Triathlon, as well as many smaller triathlons and running races.  She is a two-time Alaska Triathlete of the Year and has achieved All-American status in USA Triathlon age group rankings.  She is one of the founding board members of the Alaska Run for Women.  In 2002 she was diagnosed with breast cancer and since then has won the survivor division of the run many times.  She owns Multisport Training of Alaska, providing coaching for Alaska triathletes, and is the General Manager of Running Free Alaska, an organization that brings run workouts and races to the women prisoners at Hiland prison.