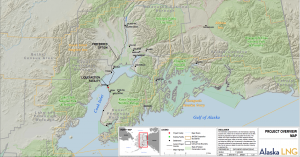 As the state prepares to take a larger role in the Alaska LNG gas line project, its leadership team is once again in flux.

The changes are bringing new attention to the salaries involved — including one negotiator who has been paid about $120,000 a month since June.

Rigdon Boykin is a South Carolina-based attorney who has been serving as the state’s lead negotiator on the Alaska LNG project. In that role, he has overseen discussions with the state’s three main partners, Exxon Mobil, BP and ConocoPhillips; and coordinated among the alphabet soup of state agencies involved in the gas line.

For that work, he’s been very well-paid.

Boykin isn’t a state employee. As a consultant with the Alaska Gasline Development Corporation, or AGDC, his contract called for a salary of $120,000 a month from June through October — and $100,000 for the month of November.

In an interview last month, Gov. Bill Walker says that’s the price the state has to pay for expertise.

“We’re negotiating a contract that Alaska will be bound to for probably 25 years,” Walker said. “There will be billions of dollars moved back and forth across the table. We have to bring our A-Team.”

But now, it seems, Walker is reshuffling his A-Team.

After the Alaska Dispatch News reported last week that Boykin had traveled back to South Carolina, Walker released a statement saying he would recommend AGDC use Boykin “in a different capacity going forward.”

It’s not clear who, if anyone, will take his place.

As for Boykin’s pay, Baker said the contract isn’t the norm for the state-owned corporation.

“I would say this is at the very high end of the pay scale,” he said.

Boykin’s contract was negotiated by the governor’s office. Spokesperson Katie Marquette said in an email that the rate is comparable to what past consultants on the gas line have made.

Reached by phone, Boykin said he’d rather not comment.

Meanwhile, the state has ended its contract with another highly paid contractor, Texas oil and gas consultant Audie Setters.

Setters was tasked with advising the state on the natural gas market and reaching out to potential buyers. The Department of Natural Resources estimates Setters’ compensation at about $587,000 for fourteen months of work.

A Department spokesperson said via email that the state has decided it needs a permanent employee in the role. The legislature approved funding for that position during the recent Special Session.

The estimated salary? About $1.1 million a year, plus benefits.

Rachel Waldholz covers energy and the environment for Alaska's Energy Desk, a collaboration between Alaska Public Media, KTOO in Juneau and KUCB in Unalaska. Before coming to Anchorage, she spent two years reporting for Raven Radio in Sitka. Rachel studied documentary production at the UC Berkeley Graduate School of Journalism, and her short film, A Confused War won several awards. Her work has appeared on Morning Edition, All Things Considered, and Marketplace, among other outlets.
rwaldholz (at) alaskapublic (dot) org | 907.550.8432 | About Rachel