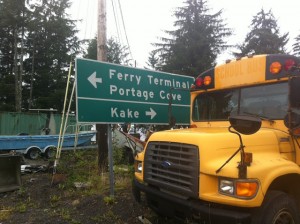 While recent reports show the suicide rate falling slightly within the state, Alaska still has the highest rate in the nation – especially among Alaska Native young men. One community in Southeast had nearly the highest rate in the nation back in the 1980’s, but today they see almost no suicide in their village. In the next installment of our “Being Young in Rural Alaska” series, Sarah Gonzales goes to Kake to learn about what it means to successfully prevent suicide.

SARAH GONZALES: Here at the Boys and Girls club in Kake, Alaska, teens gather after school to play pool and video games. Scott Jackson is their mentor. A man in his 30’s, what he lived through as a child now accounts for his job as a suicide prevention counselor.

[Scott Jackson] “Just being here in the 80’s during the epidemic when I was a young man, a young kid, it was a little difficult losing the family members that I did which was cousins and uncles and a cousin that was like a brother to me, so in the last couple of years I decided that was a field that I really wanted to partake in.”

SG: In Kake, residents remember “The Epidemic” as a dark and difficult time during the 80’s: 15 young people took their own lives in two years. Joel Jackson was the local chief of police during the epidemic – when he was barely 20 years old.

[Joel Jackson] “It brought it to light…You know, everybody was going through it when it started happening, it was like shellshock. It was one after the other and it uh kinda caught everybody off guard. We had some suicides before but nothing like that. It was all due to alcohol.”

SG: The residents recognized the need to cope with this immediately and it’s why the decided that talking openly and honestly – as a community – was the only way to heal.

Kake resident Anthony Gastelum is a suicide survivor himself and he’s candid about his past struggles with drugs and alcohol. Today, he’s been sober for almost 20 years and he works in suicide prevention with youth.  He knows from experience that successful prevention is so much more than a one-off class or a pamphlet you hand to kids saying don’t do it. It’s learning Tlingit dances, it’s a safe place to do homework, and it’s helping adults heal from substance abuse and alcoholism.

[Anthony Gastelum] “Being around adults that live a clean and sober life and can learn by example is very attractive to the students that are involved in the things we do in the community.”

SG: Gastelum says that if you asked them, most of the kids in Kake wouldn’t pinpoint suicide as an existing issue in their village today.  And he likes it that way. He’s working to help to create a physically and mentally healthy environment for these youth to grow up in.

[Gastelum] “…and you know it is true that it does take a whole community to raise children.”

[Joel Jackson] “When you carve, for me anyway, it’s like putting my mind at ease.”

[Jackson] “And when you’re carving and you’re dealing with sharp knives you basically have to concentrate. And everything else that is bothering you – well, first of all you have to have your mind in a good state – and it’s just more or less trying to get them to, you know, put their things, whatever’s bothering them, aside to put their mind at ease and, it seems to work.”

For an extended cut on this story including more voices from Southeast Alaska, please visit KidsTheseDays.org

This reporting series is a production of the Content Producers Guild and is made possible through funding from the Association of Alaska School Boards’ Initiative for Community Engagement program. For more photos and information please visit KidsTheseDays.org.