Veterans and their families were joined on the park strip in Anchorage today by Senator Mark Begich and Veterans Administration Secretary Eric Shinseki. The two officials left immediately following the gathering for events at Joint base Elmendorf/Richardson. They will also travel to Bethel and Kwigillingok before returning to Anchorage tomorrow for more discussions with veterans at the Loussac Library. 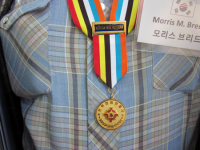 Senator Begich said today’s gathering was particularly important because of a special honor  and medal given to Korean vets from the Korean government. Begich said what stood out to him was how many where there to accept the medal.

Berkeley Ide is the commander of Korean vets in Alaska and has been the Master of Ceremonies at the veteran’s Memorial Day event for the past 10 years. He says the Korean government has a re-visit program and for the past decade has invited American veterans of the Korean War to visit the country. While there, they were given the ambassador for peace medal. But Ide says with the 60th anniversary of the Korean War, the Korean government realized there were many vets who would not be able to make a re-visit to Korea.

Lawrence Killinger is a Korean veteran living in Kenai. He said he’d never been to a gathering of veterans before moving to Alaska. He was overcome as he tried to express his gratitude.

His wife Mary Lee helped express their thanks to the Korean Government.

Veteran Morris Breed said his ancestors fought at Bunker Hill. His first day of battle in Korea was July 27th, 1950.

The magnitude of those words then brought tears.