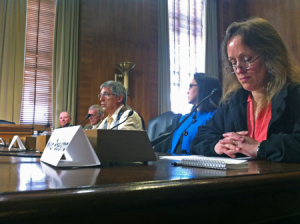 The Sealaska Native Corporation was in Washington Wednesday making its case to select lands in the Tongass National Forest. It’s a fight that’s been going on for years, and one that’s caused intense controversy in southeast Alaska.

Republican Senator Lisa Murkowski acknowledged how divisive the issue has been.

Murkowski supports Sealaska’s land selections, and has authored a bill that has backing on the other side of the political aisle from Democratic Senator Mark Begich. Murkowski introduced a revised Sealaska lands bill last month after hearing an outcry from some Southeast Alaskans upset that Sealaska would take lands currently used for hunting, fishing, and tourism, and deemed ecologically sensitive.

The current bill would let the corporation choose from among 79,000 acres on Prince of Wales and Koscuisko Islands, mostly for timber use, and additional lands would be set aside for tourism and as sacred or cultural sites.

It still goes too far according to some, like Myla Polestra of Edna Bay who testified before the Senate Energy Committee Wednesday against the bill, called S-730.

The Obama Administration voiced its objections even as it said it’s time to finalize a deal. Harris Sherman, Undersecretary for National Resources and Environment at the Agriculture Department, says Sealaska’s picks may hurt local mills.

But Senator Murkowski warned that without the land swap, local timber in Southeast will die. And Sealaska says this is a unique situation and that the corporation is entitled to make selections under the Alaska Native Claims Settlement Act, or ANCSA. Board member Byron Mallott testified that allowing the corporation to make the selections won’t be doing something special, but will instead be showing it respect.

While Senator Murkowski has adjusted her bill after public comment, Congessman Don Young has not made changes to the version introduced last year. Thursday, it will get an airing over in the House, in the Indian Affairs Subcommittee he chairs.