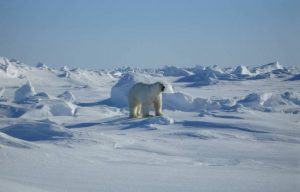 A male polar bear near Kaktovik. Polar bears have long been a powerful symbol for environmental groups fighting oil development in the Arctic. (Photo courtesy U.S. Fish and Wildlife Service)

Blink and you might have missed it: In just three weeks, there was a profound shift in the landscape for energy and environmental issues in Alaska.

While many Alaskans might have been busy with Christmas plans or ringing in the New Year, some of the state’s biggest resource battles reached turning points. In total, there were four big developments since mid-December, largely thanks to the Trump administration.

If you didn’t catch them all, here’s a quick review:

No. 1 — Congress approves drilling in the Arctic National Wildlife Refuge

Most Alaskans probably caught the biggest news story on the list, because it’s a doozy: On Dec. 20, President Donald Trump signed a tax bill into law that opened part of the Arctic National Wildlife Refuge to oil development.

This was a huge win for Alaska’s political leaders and a huge loss for environmental groups, who fought oil drilling in the refuge for nearly four decades.

Then, in early January, the Trump administration made another big announcement related to oil and the Arctic.

Interior Secretary Ryan Zinke announced he is putting Arctic waters back on the table as part of a new, five-year draft plan for offshore drilling leases. Zinke called it part of “a new path for energy dominance in America.”

The plan includes the Beaufort and Chukchi seas, which the Obama administration controversially removed from its offshore drilling plan back in 2016. But it also opens the door for oil development off nearly all of Alaska’s other coasts, except for the North Aleutian Basin, near Bristol Bay.

No. 3 – Pebble mine permit submitted

In late December, the Pebble Limited Partnership finally submitted a permit application to build a gold and copper mine in Southwest Alaska, a controversial proposal because of its proximity to the Bristol Bay salmon fishery. The Obama administration pretty much stalled Pebble when the U.S. Environmental Protection Agency proposed restrictions on the mine. But under the Trump administration, a settlement was reached, and now Pebble is moving forward again.

How much have things changed now that Donald Trump is in the White House?

Another part of Alaska feeling the dramatic shift in Washington, D.C. is King Cove. In the first week of January, the city of King Cove said it reached a deal with the Trump administration to build a road through the Izembek National Wildlife Refuge.

King Cove has long argued it needs a road to access the airport in Cold Bay for emergencies. Environmental groups believe a road will jeopardize sensitive habitat. The Obama administration took environmentalists’ side and rejected the road in 2013. But as with a lot of Obama-era policies, it appears the Trump administration is trying to turn it around.

Those were the four biggest developments, but there are a few other stories worth noting.

— Just before Christmas, the Trump administration announced it has dramatically increased its estimate for how much oil is in the National Petroleum Reserve-Alaska, or NPR-A. NPR-A usually plays second fiddle to the Arctic Refuge in the headlines. There’s a fight brewing there, too: Oil companies are increasingly interested in drilling in the NPR-A, but the Obama administration put about half of it off limits. The Trump administration is thinking about changing that. If there’s more oil in NPR-A than previously thought, that’s likely to influence the decision.

— Finally, at the end of 2017, Congress allowed an excise tax collected on American oil to expire, which goes into a government trust used for oil spill cleanup and prevention. However, Congress could eventually renew the tax, and the current balance is approximately $5.7 billion, according to Public Employees for Environmental Responsibility.

All told, the Trump administration is ushering in a historic shift in how Alaska’s resources are managed, from the North Slope to Bristol Bay. However, it’s important to note that many of these decisions aren’t final yet. Environmental groups have vowed keep fighting these changes — including in court.

Lori Townsend: How did this all happen at the same time?

Liz Ruskin: Most of these things in the works for years and years. So about a year after Republicans got unified control Washington, enough time for issues to incubate one last time, for the Interior department to staff up, things were ready to hatch. And then you add the catalyst of the end of the year, people who want to leave for Christmas vacations, etc. Deadlines produce action.

I asked Lisa Murkowski if there was any single factor at work and she said no, but even she sounded a little stunned by the pace:

“Oh my goodness!” Murkowski said. “It’s like the beginning of the new year, though, and It’s kind of nice to know that some of the things that we’ve been working on for decades we’ve made some real progress.”

LT: When do you think we’ll see action on the ground on these changes?

LR: Uncertain for all of them. For ANWR, long road ahead. First step is probably updating the government’s assessment of how much oil is there. We could possibly see 3-d seismic work done in the refuge this winter. Maybe.

All Pebble did was submit for a permit, which was a big move, but the permit still needs approval. Mine opponents will be watching closely, and for all of these projects, there are likely to be lawsuits aiming to slow or stop the process.

LT: What’s the story with this massive offshore leasing expansion?

LR: A “draft proposed” program. And, as Elizabeth (Harball) said in the story, it proposes to open up nearly all federal waters, nationwide! But that can be seen as more of an ideological statement, that it SHOULD be open. Now begins the winnowing.

No sooner was the draft plan out than Secretary Zinke removed Florida, which some saw as a political ploy. But Murkowski says it’s winnowing process. This administration wants to start with everything open and work Some areas, according to the government, have no significant potential.

LT: How are environmental groups handling this string of defeats?

LR: Division between some who are alarmed and some think, especially with offshore plan, that it’s not realistic to add 19 lease sales to these areas. Picking their battles. But also assault from all sides.

LT: Are the any other potential decisions that could affect Alaska coming up?

LR: NPR-A. The trump administration put out this assessment, saying a lot more oil in NPR-A than they thought before. A lot of that oil in areas Obama administration put off limits. Environmentalists are bracing for those areas to be on the table again.

Elizabeth Harball is a reporter with Alaska's Energy Desk, covering Alaska’s oil and gas industry and environmental policy. She is a contributor to the Energy Desk’s Midnight Oil podcast series. Before moving to Alaska in 2016, Harball worked at E&E News in Washington, D.C., where she covered federal and state climate change policy. Originally from Kalispell, Montana, Harball is a graduate of Columbia University Graduate School of Journalism.