Twenty-two-year-old Anna Redmon and 19-year-old Natilia Edwards spend a lot of time bantering — or is it bickering? Sometimes it’s hard to tell.

“The irritation in my voice irritates her,” Anna says over breakfast at a local coffee shop.

“She just has so much attitude,” Natilia retorts. “I’m like, ‘Can you rein it in, maybe like smile while you talk or something?’”

The pair say their breakfast chatter is pretty tame. At home, they yell at each other at the top of their lungs across their small apartment but are dying laughing within minutes. They say they can be calm together, too, even sweet.

“It’s like the weird little things,” Anna says. “Like she’ll sit on the bathroom floor while I take a shower.”

“Yeah, we’ll just sit there and talk,” Anna agrees. “And it’s just like those little things people don’t normally do.”

Just like a 22-year-old doesn’t normally become a foster parent to teens, who can stay in foster care until they are 21. But sometimes that’s the best solution.

Natilia and Anna almost didn’t meet. Natilia was 13 when she entered foster care and she kept getting invites to gatherings from a group called Facing Foster Care in Alaska. It’s an organization run by and for current and former foster youth. Natilia says she did not want to go.

“It’s like a weird conference for all these foster kids,” she explains. She didn’t think she could possibly go. “Because I was like, being in foster care, it’s a bad thing. You have a lot of guilt as a foster youth because you think that maybe if you did something different, maybe something could have changed.” She didn’t want to be around other foster kids.

Eventually, when Natilia was 16, she went to an FFCA weekend retreat and was surprised to see other kids she knew.

She also met Anna, a former foster youth and group leader, who was trying in vain to calm down a room full of young adults. 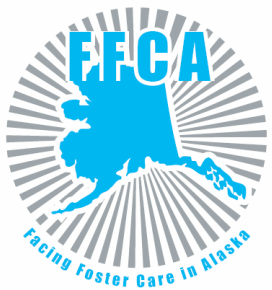 “We were all trying to getting everybody to be quiet and she would not stop,” Anna recalls, glaring jokingly at Natilia. “And I looked over and was like ‘Shut up!’ And she was like ‘I don’t know who you think you are!’ And it just downhill spiraled the whole retreat.”

But through FFCA, they kept running into each other and talking. At one point they united in a friendly rivalry against other youth, and it led to a solid friendship.

Like many friendships, they fell in and out of touch. They hadn’t spoken much in months when Natilia texted Anna at the end of the summer, asking to hang out.

Anna arrived that evening. Natalia says, “When I walked up to the car, immediately I set foot in the car, and I just completely started crying.”

Natilia says she was suicidal that day, had written her suicide note, and reached out to her older friend as her last resort. After finishing her first year of college, she had been homeless all summer. Then she was kicked out of the most recent place she was staying. When she reached out to some of her former foster parents, they didn’t offer much support.

Anna immediately offered space in the apartment she shares with her mother and her two-year-old daughter.

“I didn’t have an option if I was moving in or not,” Natilia says.

“There was no option, actually,” Anna agrees, speaking over her. “It was, ‘We’re gonna get your stuff and you’re moving in.'”

Natilia was uncertain at first but within an hour they were picking up Natilia’s things and moving her into the living room.

The pair spoke with the Office of Children’s Services and found out that because Anna is over 21, she can legally be Natilia’s foster parent, if she gets licensed. Though some foster youth chose to age out of the system at 18, Natilia chose to stay until she’s 21, so she needs to live at an official placement.

Though the two are close, it still took Natilia a while to be comfortable enough to ask for basic things.

“I think she just finally started asking last week or two weeks ago for the things that she needs,” like mouthwash and soap Anna says.

Anna reflects back on the day Natilia moved in. She had just broken up with her boyfriend. She was supporting her family. Things were hard.

“I think we both saved each other there,” Anna says.

Natilia looks at Anna for a long moment then says softly, she didn’t know that. They’re quiet for a few seconds— then they jump back into the banter.

Want to join the conversation? This month we’re talking about young people. In December, we’re focusing on elders. Tell us what it’s like to age in Alaska by calling 907-885-6055 and leaving a voicemail. You can also text “aging” to the same number.

Many of Hooper Bay’s dunes were washed away by the storm. Without them, residents feel exposed.