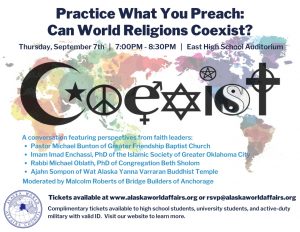 This was a conversation featuring leaders of multiple faiths and audience participation.