Governor Bill Walker is facing a major decision on one of Alaska’s oldest and controversial megaproject ideas: whether to extend Juneau’s main road 28 miles closer to Haines and Skagway. 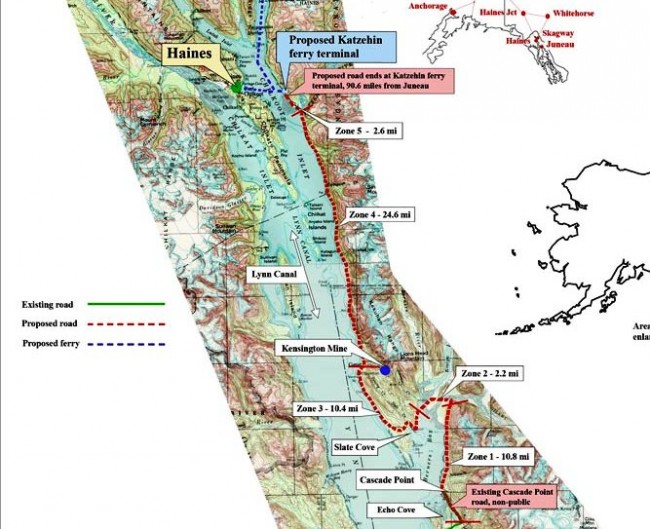 The route the state previously supported was estimated to cost $574 million, of which the state would pay 9 percent.

For Governor Walker, the question is whether this spot should be the road’s end. Walker shut down two megaprojects last year: the Knik Arm bridge and the Susitna-Watana dam. He says he weighed his options during a recent flight from South Korea.

The steep mountains that border Lynn Canal have prevented Juneau from being connected to other roads. In 2006, state and federal officials announced plans to design and build the road extension, which would take it to the Katzehin River.

But the Southeast Alaska Conservation Council, or SEACC, successfully sued to block the decision. A federal judge found that the state hadn’t considered reasonable alternatives.

Walker’s options were laid out in a state-funded analysis in 2014 put together by the Juneau-based consultants Milton Barker and the McDowell Group.

They range from doing nothing to building the road to Katzehin, to building a separate road extension on the Haines side of the Lynn Canal. Barker said the analysis isn’t the final word.

“I can explain how the benefit-cost ratios were derived and what they mean,” Barker said. “But how to weigh those in selecting projects for funding is a decision that rests with the state and federal government.”

Listing the pros and cons of the project are well-rehearsed for those who’ve been engaged in the battle over it through the decades. On the pro-side: The federal government is bearing the vast majority of the capital costs. And extending the road would cut hours in travel time to Haines and Skagway compared with current ferry travel.

But the anti-road side notes the road would cross a long series of avalanche chutes, which would block traffic in the winter and add high maintenance costs.

Economic consultant Gregg Erickson recalls telling Walker’s transition team in 2014 that the state could save money by killing megaprojects like the road.

“The one I focused on was to end those megaprojects that really don’t pencil out under any calculus in terms of the benefits they would provide to Alaska,” Erickson said.

Erickson remembers being asked at the transition team conference whether it would be politically difficult.

“My answer was, well, that’s what political courage is all about,” Erickson said. “And I recall Governor-Elect Walker nodding knowingly. “

Former state Transportation Commissioner Dick Knapp says the road extension will be worth it.

“There are a lot of socioeconomic benefits,” Knapp said. “And they include basically binding together the Southeast . By tying at least three communities together.”

Barker notes that the analysis he did with the McDowell Group didn’t consider other factors, such as the effects on economic development and the environment.

“Pretty much, that will be the one and only project we will get in the region,” Ferry said. “And there are a lot other needs. “

“Driving through 36 avalanche chutes, five tunnels, and an incredibly dangerous road, doesn’t necessarily increase our access and it certainly does not make travel safer,” Ferry said.

The state-funded analysis found one alternative to doing nothing that would provide more user benefits than it would cost the state: extending the road a much shorter distance along Berners Bay. If federal money is included, the costs exceed the benefits.

Transportation Commissioner Marc Luiken said early last year the state risked reimbursing the federal government as much as $27 million. It’s not clear if Walker will announce a decision this year, but he’s actively considering it.