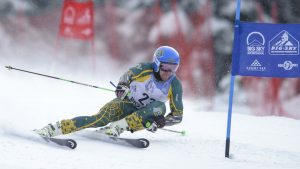 We’re at a strange time in Alaska, when budget cuts have forced the University of Alaska to look at eliminating sports, potentially making Alaska the only state without collegiate athletics. Strangely enough, UAA’s very first sport is the first on the chopping block, its’ ski team. On the next show, as these issues remain hot, we’ll hear interviews with the alpine and nordic coaches at UAA. We’ll also speak with Erik Flora, the director of the skiing program at APU, who originally came to Alaska as a student to train at UAA. Of course, the coaches want to save their programs, we’ll hear their reasoning and how they think the ski collegiate teams serve Anchorage’s skiing culture. We’ll learn a lot more about a subject we haven’t covered before on the show.