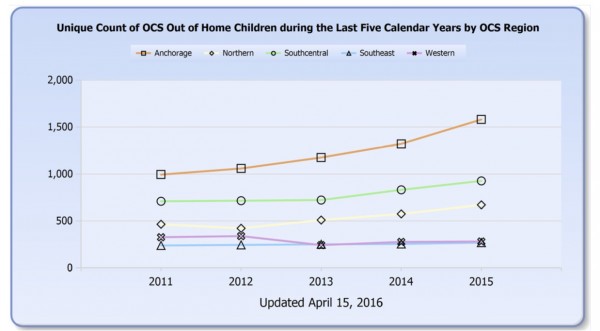 Nearly 3,000 children are in out of home care in Alaska – an all time high – and as a result case workers are overburdened and can’t give foster kids or foster families the attention they need.

“If you give a worker twice as many cases as is reasonably able to be done, the entire system is going to suffer,” said Travis Erickson, the operations manager for the state’s Office of Children’s Services.

Erickson has been with the agency for 17 years and says the problem isn’t new. “I could have given the same speech five years ago, ten years ago, and 15 years ago. The only thing that’s different, really, is that we’re doing a better job at keeping children safe, and the system is being taxed harder than it has been probably ever.”

Erickson said multiple factors are driving up the numbers statewide. One is OCS is screening more reports of abuse to see if the government needs to intervene sooner. They are trying to reduce rates of repeat maltreatment, and keep children safer.

Substance abuse is the number one reason kids end up in foster care, “but it’s really not clear how much the heroin growth and these designer drugs are really effecting the numbers,” he said. “But we’re concerned about it.”

He said heroin could be adding to the numbers or could just be taking the place of other drugs. They’ll have new data analysis tools available in a few months to make that determination.

The end result is the court system is determining that more kids should be placed in out of home care. And with incoming case numbers increasing, it’s harder for caseworkers to look after the kids who are already in foster care and see if they can safely be reunited with their parents or sent to another long-term family. Caseworkers just don’t have the time, so the kids just stay in the system longer.

The agency is seeing similar problems in both rural and urban Alaska, according to Director Christy Lawton. In rural areas, especially western Alaska, it’s exacerbated by smaller offices and an inability to recruit local people in small communities to work with an agency that’s often mistrusted.

Lawton said they end up hiring people from outside of Alaska who don’t stay long enough to really build trust with the communities. “And that, then, really decreases our ability to have the most successful interventions and to work with the community in a way that’s going to produce better results all around. So it’s unfortunately a really vicious cycle, and we’ve been stuck with trying to find real solutions that work.”

For Erickson, the solution is ultimately preventing child neglect and abuse instead of just reacting to it. In his view, that’s not solely the job of government, it’s up to the whole community.

“I would really like us to wake up as a state and say we’ve gotta do something different, and that’s going to take some radical thinking.”

Over the next four days we’ll explore ways that community members in rural and urban Alaska are trying to do just that, and we’ll look at ways people are trying to improve the outcomes for kids who are already in foster care. It’s all part of our series “Fostering our Future.”

Alaska Public Media will also host Community in Unity, a community dialogue about ways to improve the foster care system on April 27 at 7 pm. Find out more here.