“I do believe that the nominee should get a hearing,” she said, while taking questions from reporters in Juneau.

Late this afternoon, in a series of five Twitter posts, Murkowski essentially said there should be no nominee. 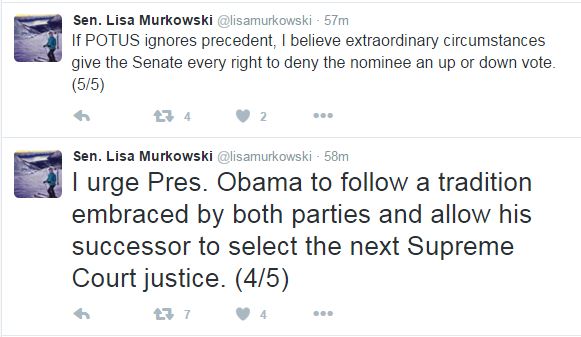 On both days, she said it’s up to the Senate to decide whether the nominee gets a vote on the Senate floor. Today, though, she went a step further. In Twitter post No. 4 she announced that she’s urging Obama to follow what she called “a tradition embraced by both parties” and let the next president make the nomination.

“If POTUS ignores precedent,” she said in tweet No. 5, “I believe extraordinary circumstances give the Senate every right to deny the nominee an up or down vote.”

It’s not clear what “precedent” and “tradition” Murkowski meant, but the claim that a president in his final year ceases to make court appointments is disputed. The independent website Politifact rated a similar claim  “false.”

A spokesman for Sen. Dan Sullivan wouldn’t say whether Sullivan believes an Obama nominee deserves a Senate hearing. But the spokesman did say Sullivan will likely oppose any of the president’s choices.