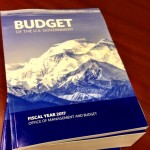 President Obama delivered his final budget to Congress this morning. It has a picture of Denali on the cover, and several big-ticket Alaska items among its pages.

“Part of this funding is set aside to address the needs that the president saw first-hand when he visited coastal communities in Alaska that are seeing their homelands eroding into the ocean at a rapid pace,” he said, in a phone call with reporters.

Alaska’s share of the climate fund would be $400 million, over a decade.

The budget also includes $150 million toward a new billion-dollar icebreaker. The White House says the money would complete all planning and design work so ship construction could begin in 2020.

“It is particularly critical for Alaska, as many of the existing Alaska topographic maps are as much as 50 years old,” she said.

The budget aims to lower the nation’s carbon emissions, in part by squeezing the oil industry. To fund a greener transportation system, the president is proposing a new per-barrel oil tax of $10.25. (That’s 25 cents higher than what administration officials said it would be last week.)  Alaska’s oil industry and congressional delegation call that a terrible idea. The budget would also eliminate tax breaks that save the oil and gas industry more than $2 billion a year.

Interior Secretary Sally Jewell says the oil and gas industry “enjoys many, many tax credits” and has an unfair advantage over alternatives.

“It is not level playing field across the energy landscape, and this budget attempts to make it at least a little more level,” Jewell said.

A president’s budget is only a proposal, but it usually influences how Congress writes spending bills. This year, congressional leaders are harshly critical.

Alaska’s delegation to Congress says they like the icebreaker money, but dislike the oil tax among, other items. Congressman Don Young, in a written statement called the budget frustrating because, Young says, it identifies problems of great concern to many Alaskans but fails to provide a “genuine path” to solve them.