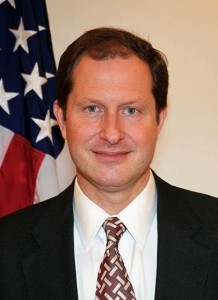 Former United States Ambassador to Sweden Mark Brzezinski serves as Executive Director of the U.S. Government’s Arctic Executive Steering Committee. He spoke to the Alaska World Affairs Council at the Dena’ina Center, on Tuesday, January 26, 2016, to provide an update on President Obama’s Executive Order to enhance coordination of national efforts in the Arctic. The presentation was called “Arctic Executive Steering Committee -­ One Year On: Report from the Executive Director.” This was a joint meeting with Anchorage Downtown Rotary.

On January 21st, 2015, in recognition of the unique challenges and opportunities presented by the Arctic, President Obama issued an Executive Order to enhance coordination of national efforts in the Arctic. The Executive Order creates expanded opportunities for Alaskans and those in the Federal government to work on Arctic issues and establishes a clear structure to improve the coordination of Federal Arctic activity.

An Arctic Executive Steering Committee (AESC) was established to oversee implementation of the National Strategy for the Arctic Region. The AESC convenes at the Deputy Secretary level to guide the development of department and agency plans to assure that Federal activity is well-coordinated and better communicated to partners such as the State of Alaska, Alaska Native communities, the U.S. Congress, the business community, international partners, and other stakeholders.

Addressing Alaskans features local lectures and forums recorded at public events taking place in Southcentral Alaska. A variety of local organizations host speakers addressing topics that matter to Alaskans. To let us know about an upcoming community event that you would like to hear on Addressing Alaskans, please Contact Us with details.