The most extensive damage appears to be near Kenai. The 7.1 earthquake was centered about 50 miles west of Anchor Point in Cook Inlet.

Kenai Police Chief Gus Sandahl said there are four structures on Lilac Lane that have been impacted by fire. Gas company Enstar has shut off service to Lilac Lane, Cook Inlet View Drive and Wells Way, but is working on a temporary line for homes not affected by fire. Sandahl said the area has been evacuated.

“Any evacuees wanting to know when they can return to their homes can call Kenai Police Dispatch at 283-7879 and we’ll provide them with the current status,” he said late Sunday morning.

Kenai Borough Director of Emergency Services Scott Walden said his staff checked on cities, fire departments and villages Sunday morning across the Inlet and across Katchemak Bay, from to Seward and back.

He said borough officials narrowed the problems down to two significant issues, damage on Kalifornsky Beach Road and the gas leak that resulted in fires on Lilac Lane.

“We were called and asked to be able to arrange some housing for evacuees from the neighborhood,” Walden said. “We worked closely with the local Guard Armory in Kenai and have been able to house 15 to 20 people since early this morning.

[The] Red Cross is on their way down from the Valley to assist us with shelter management and we expect them here around 2 o’clock this afternoon and so far, the housing seems to be working out very well. It’s a little close quarters.”

Janice Gottschalk lived in one of the houses that was destroyed on Lilac Lane in Kenai. She, her fiancée and three kids, ages 12, 10 and 9 got out of the house with only the clothes on their backs.

“About 1:30 the earthquake hit and probably about 1:40, 1:45 I heard my neighbor’s house blow up,” she said. “Her natural gas blew off the roof. And then we were all told five minutes later to evacuate.”

They went to a friend’s apartment across the street and waited with a dozen people while fire crews attempted to contain the fire.

Gottschalk and her family were staying at the Kenai Armory, which is serving as an emergency shelter for displaced residents.

The damage to Kalifornsky Beach Road in Kenai is at about mile post one, according to Jill Reese, a spokesperson with the Alaska Department of Transportation.

“The northbound lane dropped about a foot and a half for about 150 feet. Our guys got out there and marked it off. So it will be one lane until at least Tuesday night.”

The road repair will be temporary for now, with a permanent fix planned for this summer, she said. DOT engineers checked bridges in the Kenai and Anchorage area last night to make sure there was no damage, she said. The bridges will be reexamined Sunday in the daylight.

“Until they can do a fly over and assess,” Navarre said. “The refinery is up and running. All and all, for the size of the quake it was, so far, things are looking reasonably good.”

Navarre says there are still some isolated power outages in the borough, but most people have electricity restored.

In Anchorage, Portage and the Mat-Su Valley the earthquake knocked power out to thousands of homes. By midday Sunday, electricity had been restored to all but a handful of homes.

Municipal Power and Light spokesperson Julie Harris said most of the outages were caused when fuses were blown from, “overhead lines slapping together” during the shaking. 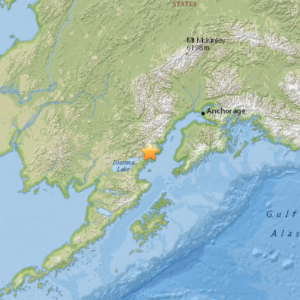 The earthquake jarred Alaska a little about 1:30 a.m, according to the United States Geological Service. It was felt from Fairbanks to Juneau, according to reports streaming in through Twitter over the hashtag #akquake.  The USGS pegged the quake’s epicenter near Lake Illiamna, about 162 miles southwest of Anchorage.

The National Oceanic and Atmospheric Association said at the time that a tsunami was not expected.

Shortly after 2:00 a.m., the Anchorage Police Department reported that it has not received any major reports of damage or injury as a result of the strong earthquake.

Early reports in over Twitter said Anchorage and the Mat-Su are dotted with power outages.

Jenny Neyman, KDLL in Kenai, contributed to this report.