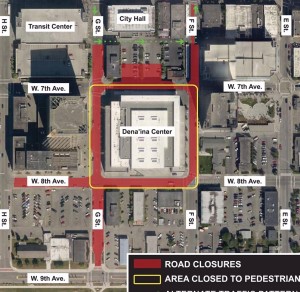 Next week, downtown Anchorage will be crawling with dignitaries, in town for an international conference hosted by the State Department. Secretary of State John Kerry and Interior Secretary Sally Jewell are coming, as are a boatload of Nordic diplomats. The foreign ministers of Sweden, Denmark, Finland, Norway and Iceland are all on the agenda for Monday’s conference. Oh, and the president of the United States will be here.

Mayor Ethan Berkowitz today announced which street will close for security. He said residents should be flexible when visiting downtown for the first half of the week, but he says the event won’t shut down commerce. As he described it, it’s a chance for Anchorage residents to show the world they can be great hosts.

The street closures focused on two buildings: The Dena’ina Civic and Convention Center, and the Hotel Captain Cook. Streets bordering them will close to traffic. Some parking spots will be off limits and some stretches closed even to pedestrians.

The closures begin Monday at 6 a.m. They’ll remain up around the Captain Cook until noon Wednesday, presumably because that’s where the president is staying while he visits Seward, Dillingham and Kotzebue. (The White House has so far provided few details about his itinerary. The opacity is a typical feature of high-level security.)

“There will be places where we will tell you you can’t walk. You just can’t go there. But we’re not setting up some sort of screening stations for pedestrians,” Mew said.

Chief Mew says he can’t provide an estimate of how much the increased police presence will cost, citing security reasons. He says the city’s request for federal reimbursement hasn’t been successful.

Municipal traffic engineer Stephanie Mormilo says she knows people will want to come downtown and participate in the presidential excitement, and she says they should.

“I hope everybody is patient and respectful,” she said. “Obviously,there’s going to be impacts. Hopefully they will be minimized as much as possible. But traffic patterns are going to be different than normal. So pay attention to signage, pay attention to barricades, and just be respectful of those who are trying to direct you and of other drivers and pedestrians around you.”

The municipality’s homepage has closure maps and schedules. You can find a link on our website, AlaskaPublic.org.

Liz Ruskin is the Washington, D.C., correspondent for Alaska Public Media. She reports from the U.S. Capitol and from Anchorage.