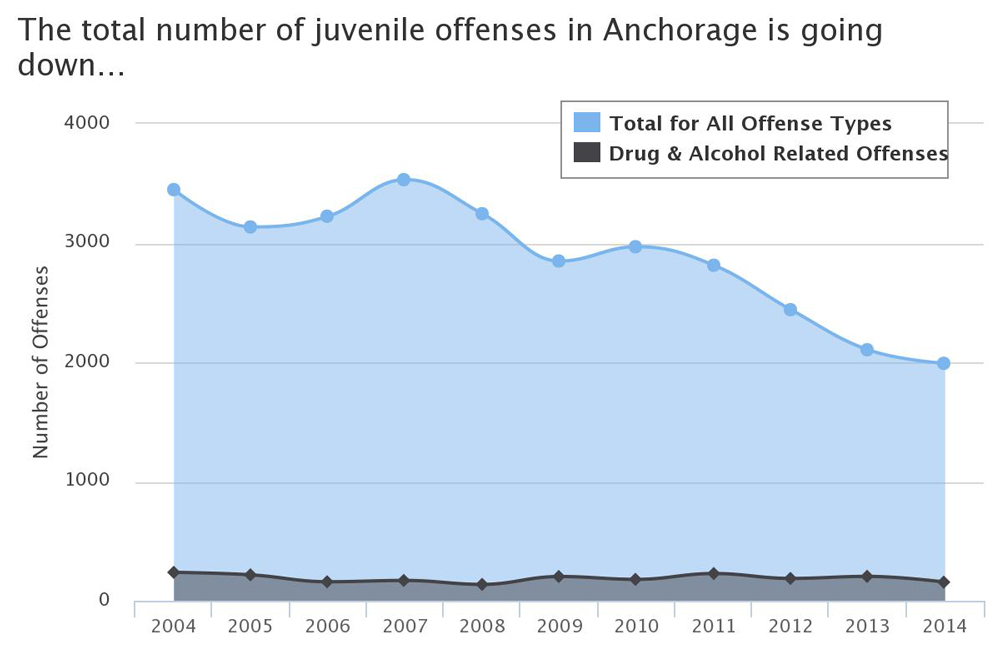 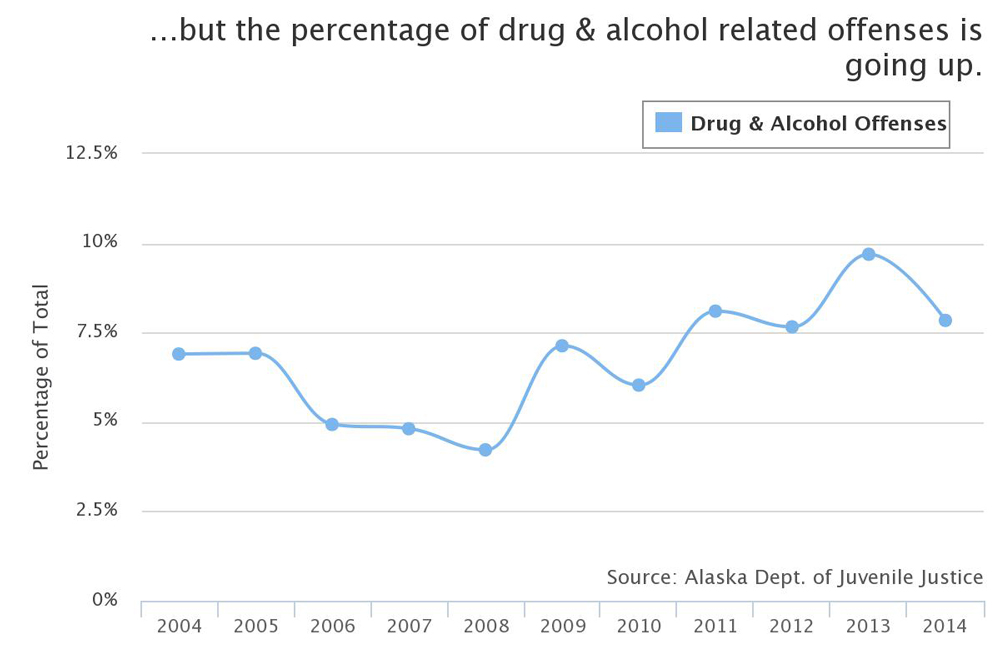 Click and drag the green slider button to compare the graphs.
In Anchorage, the number of criminal offenses by minors referred to the Department of Juvenile Justice has dropped by nearly half in the past decade for almost every offense type — except severe drug and alcohol offenses. That number has stayed fairly steady.

As a share of the whole, substance abuse cases in Anchorage are up, although as a share of the total they are proportionately small. But the numbers only tell part of the story. “The Blind Spot” is Alaska Public Media’s attempt to bring you voices from behind the statistics in Anchorage—beginning with what the numbers actually mean when it comes to juvenile drug and alcohol offenses.

Our interest started with a straightforward question: Are there more young people in Anchorage brought into the criminal justice system for problems with substance abuse than there used to be?

It seemed like a simple thing to find out, particularly because the state’s Division of Juvenile Justice tracks data about what offenses are committed in different regions of the state.

At first, the results appeared clear: every type of juvenile crime in Anchorage is dropping, except for crimes related to substance abuse.

Don’t miss the rest of the stories in our series, The Blind Spot.

So, what does this actually mean?

To find out, we took a tour of the McLaughlin Youth Facility in Anchorage, which houses about half the juvenile offenders in the state.

“In my mind, if I’m thinking of a correctional setting, this is it,” said Dennis Weston, head of McLaughlin, standing in a large tiled room lined with detention cells. Each one has a plastic bed topped with a mat, a steel toilet, and a small frosted window.

Weston has seen a lot of changes since starting as a detention officer in 1992, including a huge reduction in the number of juveniles the Division handles at any one time. The number peaked in the 1990s, when McLaughlin would house up to 215 residents on its campus on any given day.

Now, the facility has about half that number, according to Weston. That’s partly because more moderate offenders are no longer getting sent into facilities.

Many of the kids who arrive at McLaughlin are in crisis. Counselors immediately evaluate whether they are a danger to themselves or others. Most have immediate trauma, behavioral disorders, or side effects from one or more substances.

Some have trickier problems.

Next to the bed in a sparsely furnished room is a breathing machine. It belongs to a young man who came to McLaughlin with serious medical issues.

“Sleep apnea with aggravating factors,” Weston said. There were also concerns over self-harm and assaults.

“So you had the medical concerns, but you also had the behavioral concerns,” Weston said, before gesturing towards the bed and machine. “But this was a big part of the problem: not getting any rest, not breathing correctly.”

As part of their work in the Detention Unit, Weston’s staff monitors situations like these. In this particular case, to make sure the equipment is used correctly, a staffer sits by the door at watch for much of the night.

Stays in the Detention Unit are short, 24 days on average. But McLaughlin also has a treatment wing, where residents generally stay 12 to 14 months. About 70 kids at any one time are going through a treatment program, which is a big share of the 100 to 120 juveniles in treatment across the state during a given year.

Nichole Cuaresma oversees the girls treatment ward inside a cottage where all the young women on campus live.

Girls made up just 26% of referrals to DJJ in 2014. The unit in McLaughlin is the only all-female treatment facility in the state system. Cuaresma generally has each girl for a year-and-a-half before they move into a six-month transition program, preparing to go from an institutional setting back into the community. To do that, Cuaresma and her staff try to create as homelike an environment as they can, while incorporating a Truama Informed Care model.

“A lot of these girls–and most of the youths in the facility–have endured a lot of trauma,” Cuaresma explained. “So restricting pictures of family, or restricting something like a stuffed animal that would make them feel comfortable, or a blanket that their grandma made–we don’t feel that it’s very conducive to treatment.”

One of the things we found out at McLaughlin is that by the time kids enter the DJJ system most have gotten into trouble multiple times.

This is evident in alcohol-related offenses. The most common alcohol-related citation for young people in Anchorage is an MCA, Minor Consuming Alcohol. You don’t get referred to DJJ after your first MCA–you go for your third.

An APD spokesperson said that does not mean fewer minors are drinking. Most MCAs are cited when police break up parties, and there has been less of that since investigations into noise complaints were downgraded to a lower response-priority.

The point is that by the time kids are logged in DJJ’s data in Anchorage for alcohol they are coping with serious substance abuse issues, sometimes coupled with a lot of other problems ranging from family issues to homelessness to self-harm.

That made us interested in the space between the statistics, when young people may be drinking or using drugs, but before a major legal intervention happens. And we found a gap.

There is no coordinated effort to track youth who have started getting into trouble and are having a hard time finding help to get clean.

“The Blind Spot” is a series examining stories of individuals who have found their own routes for dealing with substance abuse, and some solutions different agencies are developing to prevent the problem from happening in the first place.