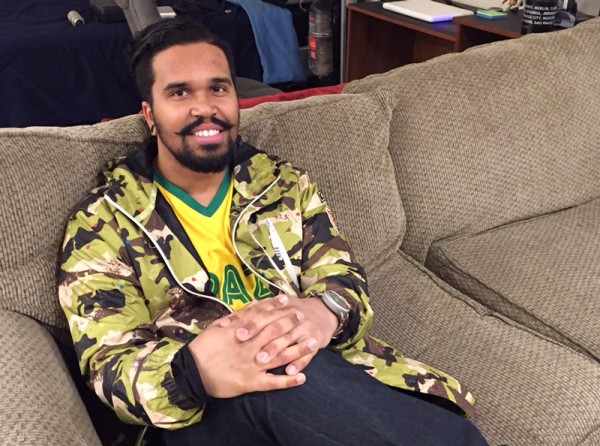 More than 90 languages are spoken in Anchorage. And one resident is trying to learn – and teach – about every single one as part of a new podcast. KSKA’s Anne Hillman found out the project comes from his desire to discover the diversity of his own background.

Corey Benefrayim sits on the couch in his one-room Fairview apartment, his wavy hair slicked back and tidy mustache styled with upturned points. A couple of years ago he tried an experiment. He walked around the Dimond Center with an audio recorder asking people to guess his ethnicity.

“’Native with Mexican.’ ‘I think you’re black or mixed.’ ‘Black and white, but I don’t know. I know, this is terrible. This one is awkward!

It’s a question Benefrayim has been asking himself for years – what is his background? His identity? He’s been mapping it out on his body.

Hillman: “Walk me through your tattoos.”
Benefrayim: “We could spend all day on this.”
Hillman: “Let’s start with your arms.”

Music notes loop up one forearm, an outline of France adorns the other. 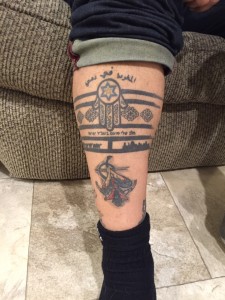 “My cousin does tattoos in Michigan, and so a lot of the times it’s like ‘hey lets order pizza and do tattoos’ and before you know it you’re getting a tattoo that you don’t regret, so much, as ‘I wish I had put more thought into that,'” Benefrayim said.

The map of France is one of those. Benefrayim says he was trying to honor his mother’s family, but they’ve actually been in Canada for more than 200 years.

“So on the backside, I got the maple leaf,” he said. “The coordinates there are for the city they immigrated to from France.”

Benefrayim says he knows a lot about his mother’s side of the family but much less about his father’s. His dad wasn’t around when he was a kid growing up in Michigan. He says he knew the basics – his father is a mixture of Moroccan, Ethiopian, and African-American. And he’s Jewish. But Benefrayim says his mother never taught him about his father’s cultural or religious heritage. So as an adult, he picked up a book on Judaism.

“I just couldn’t put the book down,” Benefrayim said. “Everything spoke to me and it all made sense and the Old Testament, it clicked and this and that.”

He bought himself a yarmulke on Ebay, went to a synagogue, and eventually converted. His father’s past is now reflected in the tattoo on Benefrayim’s leg.

“I have the hamza, the Star of David, inside the star of David is the green star from the Moroccan flag,” Benefrayim said. “In Arabic it says ‘Morrocco is in my blood’ and here in Hebrew it says ‘My heart beats for Israel.'”

Benefrayim says his quest to find out about his own heritage made him curious about other people’s. So he started a podcast called “90+”. He’s trying to track down people who speak each of the more than 90 languages represented in the Anchorage School District.

Benefrayim walks into a cozy townhouse adorned with plush furniture and a friendly dog. He sits down with a high school student from Brazil and pulls out his mic. 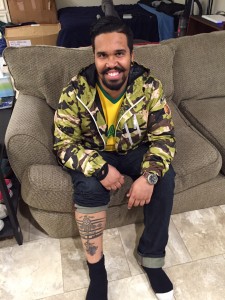 He asks Vulgara about moving to the U.S. as a small child, learning English, speaking Portuguese at home. Eventually he gets to the heart of the matter.

He says he’s influenced by his mother’s strong Brazilian culture, even though he doesn’t really speak Portugese. But he’s also shaped by growing up in Alaska and by living in Germany for a year. He says all of those things contribute to his identity.

And for Benefrayim, conversations about language are in many ways just a vehicle for talking about culture and identity – and for understanding those around you.

“You start looking at languages and cultures and stuff and you start to realize why people do a certain thing in a certain way,” Benefrayim said. “It’s beautiful.”

Back in his apartment, he shows me his mezuzah. It’s a small metal ornament that holds a Jewish prayer and is affixed to the doorframe of a home. His has symbols from both Judaism and Christianity. We talk about what it means to both of us. We’ve led very different lives, but both come from mixed religion families, both love radio. It’s a conversation we wouldn’t have had if he hadn’t started on the podcast.

“Do I really think at the end of the day my little podcast is going to create world peace?” Benefrayim said. “No. But it might make someone who normally otherwise would think badly about someone else, you know, once listening maybe to my podcast would think ‘Oh, okay, that’s a similar upbringing to what I had even though they grew up in some totally different part of the world.”

Right now, he’s only produced a few episodes. He says he’s stocking them up and they will begin airing on an Anchorage station soon.