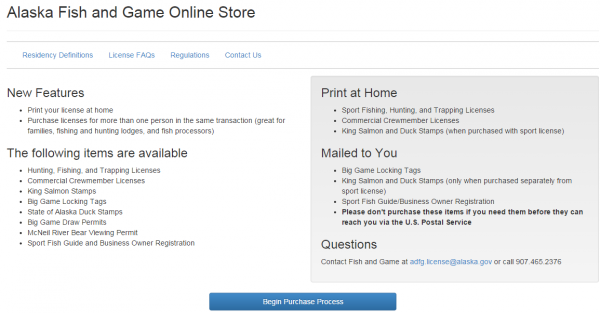 Getting your fishing and hunting licenses just got a whole lot easier. The Alaska Department of Fish and Game has launched its new online store, streamlining the permitting process for many prospective anglers and hunters.

The new store boasts several new features, including buying and printing your sport fishing and hunting licenses at home.

“When you finish your transaction, you are sent an email with your license attached to it, so you can print it at your convenience whenever you get to a printer,” Michelle Kaelke, the the licensing supervisor at the Alaska Department of Fish and Game, said.

Previously, when a customer bought a hunting or fishing license online, Fish and Game would process the application and mail the license.

Kaelke says another change is allowing customers to purchase more than one license per transaction online.

The new system also allows commercial fishermen to purchase their licenses online, which was not allowed in the past.

Kaelke says there is another major digital update in the works.

“Our next project that we’re working on is going to be selling, or showing your license on a mobile device, rather than any type of paper,” she said.

Though the exact numbers aren’t clear, Kaekle says Fish and Game expects substantial savings on everything from labor, to printing, to postage.