A mysterious illness causing mass die-offs of Pacific starfish has baffled scientists since the epidemic first started in the summer of 2013. But scientists think they may now have an answer. A new study points to a virus as the likely cause of dwindling sea star numbers from Mexico to Alaska.

University of Alaska-Southeast assistant professor Joel Markis shares an underwater perspective of what sea star wasting disease looks like in Alaska waters off the coast of Sitka.

If you’re a starfish in the Pacific, sea star wasting disease is pretty much your zombie apocalypse. Marine microbiologist Dr. Ian Hewson has witnessed the gruesome effects of wasting disease first-hand.

The first symptom is arm curling.

“The ends of their arms start to flex upwards and they start to detach from the rock’s surface,” Hewson says.

Then they undergo a process called pretzeling.

Next the starfish lose some of their internal pressure and deflate. And then lesions start to form.

“Once the lesions appear the animal almost certainly starts to die.”

The sea star’s arms begin to fall off.

“And then they undergo this process of melting. It’s often reported that they just start to dissolve.”

Up until recently, scientists didn’t know what was causing mass sea star die-offs in the Pacific.

Hewson is the lead author on a new study that identifies a particular virus as the cause of the current wasting disease outbreak.

After observing how it spread in aquariums, Hewson and his team isolated the common thread: a virus they’re calling sea star associated densovirus.

Sea star wasting disease epidemics are nothing new. But past incidences have been directly related to El Nino events — warmer seawater. The current outbreak in the Pacific is different. It’s startling for both its severity and its range — from Baja California all the way up to Alaska.

“The sea stars in Alaska have started to become really affected by this disease,” Hewson says.

Earlier this year there were just a handful of isolated reports of sea star wasting disease around Juneau and Sitka. Since then it’s been observed in Glacier Bay and as far north as Homer.

“It is, you know, spreading. It seems not to be affected too much by the waters getting cooler,” Hewson says. “I have every expectation it will move into sea star populations further along the Alaska coast — probably out into the Aleutians.”

In Sitka, University of Alaska-Southeast biology professor Marnie Chapman says the first reports of wasting disease came in from the harbor earlier this year. Sunflower stars were some of the first people noticed being affected, she says. Now, they’re more or less wiped out.

“You can’t look down at the harbors and find any right now.”

Sunflower stars are the giants in the world of starfish. Think as big as a family-sized pizza.

“It’s very dramatic to see these big sunflower stars die,” she adds. “People use the term melting a lot; they just sort of turn into these little piles of sea star bones which are called ossicles.”

Apart from its geographical breadth, what’s also unique about this outbreak is how many different species of starfish are affected — at least 20, possibly more.

“Indeed it is very peculiar to find a virus that is capable of infecting across such large numbers of species.”

Most viruses are host-specific — meaning they can only survive and proliferate in one kind of animal. But the virus Hewson identified, sea star associated densovirus — or SSaDV — is a remarkable generalist; it’s even found across different groups of echinoderms, like urchins and brittle sea stars.

And the story gets even weirder. 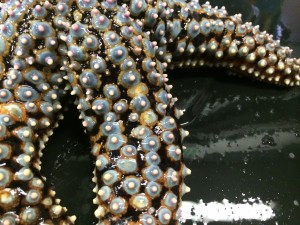 Hewson says they have no idea why smaller sea stars seem to be immune, or protected, from the virus.

So what’s the prognosis?

“You know, it’s probably going to continue until it reaches a point where it can no longer move around.”

Hewson says viruses play an important ecological role in marine environments. The current epidemic of wasting disease is severe, true, but Hewson says this kind of die-off is cyclical.

“No virus wipes out its host population entirely. There’s never been an extinction as a result of a virus.”

It’s too early to tell how Pacific marine environments will change as a result of the outbreak, Hewson says. Sea stars are major predators, and in places where they’ve been wiped out scientists are already seeing changes, notably in prey abundance, which has a ripple effect. What those changes will look like long-term is unclear.

In the meantime, scientists like Hewson will rely on public sightings of sea star wasting disease to track how far the epidemic is spreading and which species of starfish are affected.

If you live in a coastal area and have seen wasting disease, scientists ask that you log your findings at pacificrockyintertidal.org.