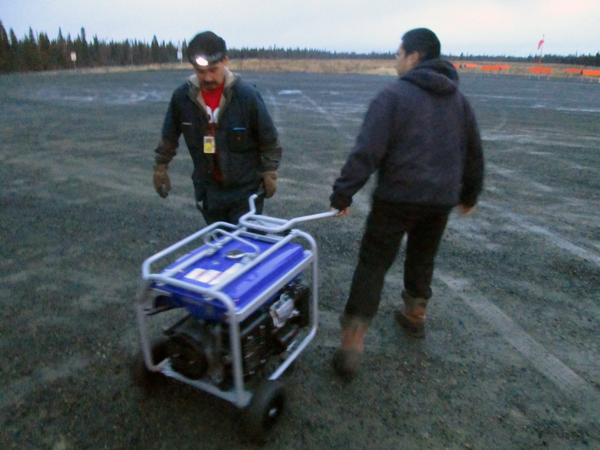 After a week without power, a backup generator is scheduled to arrive in Tuluksak Friday. But families have already lost hundreds of pounds of moose, fish, birds, and berries.

Fred Napoka met the airplane Thursday morning to pick up a new generator. As a smaller unit buzzed in the background, Napoka and a few helpers got to work setting it up. Napoka’s new 4000-watt gas generator came at just the right time.

“With this warm weather, it won’t take too long to have the freezers thaw out,” said Napoka.

Families are takings shifts with generators and running cords to their neighbors in attempts to save food. It’s not uncommon for people in the village more than 50 miles upriver from Bethel to have multiple freezers where they store subsistence food, which makes up the majority of their diet.

The more than 400 residents have been without power for a week. The Tuluksak Traditional Power Company has been unable to repair their generator following a blown piston. The state is sending an emergency generator on a DC-6. It’s large enough to power the entire community, but it’s too late for some. Veronica Andrew lists her losses.

Roy Nicholai’s more than 150 pounds of moose was no good.

“I have to give it to the dogs I guess, because I can’t cook it and eat it, because I know what will happen to me if I do that,” said Nicholai.

A long list of regional and statewide organizations are keeping close communication with Tuluksak. Community members filled out surveys Thursday listing how much food was inedible. The state wants to be ready to ask its food charities for help, if it becomes necessary.

The local store manager, Andrew B. Alexie, still had food on the shelves, but said customers were out in force.

Crews continued to work on the power plant Thursday and clear space for the temporary unit. The state says Tuluksak can use it as long as they need, as they come up with a longer-term solution.

Peter Andrew Senior, the President of the Traditional Council, which runs the utility through the tribe, says the generator has had a hard life.

“It’s very old and very outdated. I don’t know how old it is. The mechanic said it’s an outdated generator and it’s very hard to find parts for it,” said Andrew.

People have been depending on wood stoves for heat, and camp stoves for cooking. Marie Andrew was dealing with limited access to the washateria by bringing out the old washboard.

“Since the lights are off, I’m washing clothes by hand,” said Andrew.

When asked their plans for restocking freezers after the unplanned November thaw, many hoped state and federal managers could open up additional hunting for moose and caribou. Andrew had another simple solution.

In an unseasonably warm November, many residents’ calendars have been tossed aside. As freezers go warm, some even moved up Thanksgiving dinner a few weeks, to save the turkey from going spoiled.