During the Cold War, the U.S. Atomic Energy Agency made plans to detonate nuclear bombs a few dozen miles from Point Hope. The idea–part of Operation Ploughshares–was to make an Arctic deep draft port by harnessing war-time technology for civil engineering projects with strategic value. Strong opposition from Point Hope halted those plans, but not before secretive experiments were conducted. 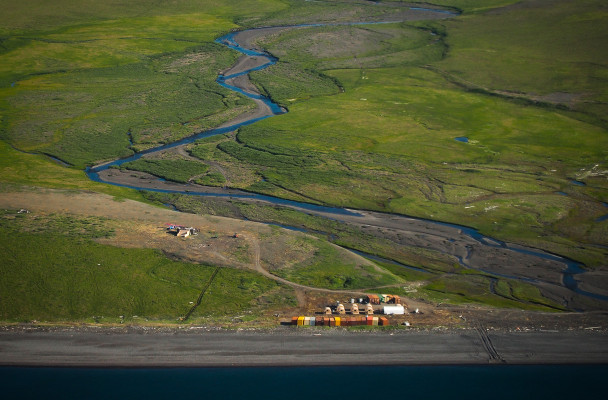 The staging ground for a final clean up of the Project Chariot Site, 23 miles from Point Hope. Photo: Zachariah Hughes, KNOM.

This summer, state and federal agencies are cleaning out what they hope are the last remnants from Project Chariot’s legacy, even as residents of Point Hope say they still feel left out of the conversation about what happens on their land.

On Wednesday, The U.S. Department of Energy brought a small group of reporters to see the bare-bones camp where remediation work began in July. At the Cape Thompson site, a few tents are clustered behind rows of Connex trailers, backhoes and four-wheelers buzzed about, and the workers piling bags of dirt for removal all carry either 12-gauge shotguns or holstered .44′s as bear protection. Some have both. The operation is costing around $3,000,000, and the whole point is removing soil that was tainted with diesel when a series of test-wells were dug in the early-60s.

“It’s important for us as an organization, and it’s important for me personally,” said Mark Kautsky in the back of an all-terrain vehicle bouncing from one site station to another. Kautsky has overseen the Chariot site for DOE’s Office of Legacy Management, and worked on its clean-up since 2009. “I want to make sure that the community understands that we take this seriously, and that we want to do everything we can to right the wrongs that have been done over the years.”

Kautsky sees DOE’s work not just as the environmental task of shipping out fuel-tinged soil, but also rebuilding the trust-relationship with the community of point Hope.

“The wrongs that we’re talking about [are a] lack of adequate communication, a bully approach to doing the projects without consultation, without informing the citizens of what’s going on over here,” Kautsky continued.  “And what we’re trying to do is just heal that wound, and do what we can to improve the relationship.”

Though atomic bombs never went off, for decades the government was highly secretive about what did happen at Cape Thompson. And even what is known can seem troubling.

“They were called scaling tests, done with high explosives,” Kautsky explained, responding to a query on lingering suspicions detonations took place. “That question about whether nuclear devices were ever brought to the site or not is one we’ve looked into very closely. And there was never the kind of equipment that would have been necessary to actually drill a hole that was the size that was required to put a nuclear device into. So no, these weren’t nuclear materials that was shipped up here–conventional high explosives.”

John Halverson monitors contaminated sites for the Alaska Department of Environmental Conservation, which also looked into Chariot’s records. From Halverson’s perspective, the department’s standards for cleaning up all the known contaminants will be met this summer.

“For the clean-up work this should be the end of anything that’s planned,” Halverson said as the group approached the site of the Charlie test well. “There will still be some documentation as far as where the bore-holes are planned. But there’s been a lot of record reviews, and a lot of work done to try and identify all the potential problems. And from information that’s available we think that this’ll be the end of the clean-up work.”

Agencies visited Point Hope in March to discuss plans for the season’s work at Chariot, and they are heading back in a few weeks, once the project’s done.

But leaders in Point Hope say this is just more of the same.

“We don’t want to hear it by word of mouth. We want to see,” said Steve Oomittuk, sitting at home in Point Hope, the second-floor room filled with family pictures, art work, and DVDs. “I don’t know of anyone from our community working over there to watch, just to make sure this is happening.”

Last year, Oomittuk retired from a decade as mayor of Point Hope, and does not believe the government has earned back enough trust to be believed at face value. He and others note that when it comes to Chariot, Point Hope has repeatedly been consulted either late or after work already took place, only to find out more for themselves later on.

Jack Schaefer is the Tribal president and current mayor in Point Hope, and since the early-90s has poured over records and classified documents trying to figure out for certain what happened at Chariot.

“There’s still eight boxes that need to be declassified,” Schaefer said in his office within the domed Qalagi building.

For Schaefer, the paper-battles over declassification are not just quibbles about the historical record. He wants to know if materials brought to the site can explain the elevated levels of stomach and throat cancer that killed many in Point Hope in the years after the Chariot experiments.

“I was hoping that you would talk to some of those that were still alive, that had witnessed some of the stuff—I don’t know if you’ve been able to do that?” Schaffer asked, slightly slowing the frenetic clip of his speech. “We lost a lot of people, and so we don’t have very many witnesses in regard to that.”

Oomittuk has spent most his life whaling, and said that if the community is unsure–or can’t trust–what the government did, then there is insecurity over whether subsistence foods are safe to eat.

“We always believe that the animals gave themselves to us. That made us who we are as a people. Our identity. Our food source. Our clothing. Our shelter,” Oomittuk explained. “That Cape Thompson area is very vital to us.”

Schaffer was not certain when exactly DOE is expected to arrive in Point Hope for their final update. But he said certain steps still have to be met for any of their claims to be credible.

“I do hope that a trust-relationship is mended, and that there is more transparency, and that we do get the complete set of declassifications, and deal with it on a government-to-government basis,” he explained.

There will probably always be disagreements over what exactly the coded and complicated troves of documents related to Project Chariot actually show. But for leaders in Point Hope to still not trust or be up to speed on what is going on now means Chariot’s legacy isn’t over yet.

Anchorage digs out of more than a foot of wet, heavy snow