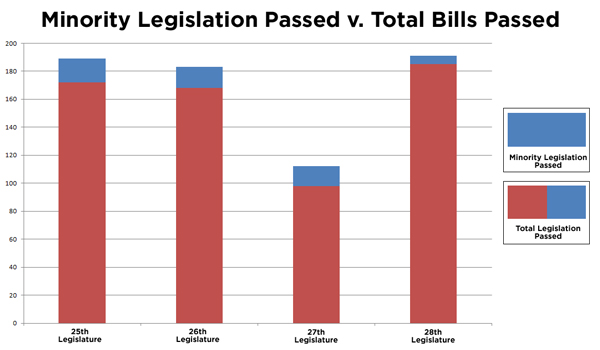 When the Bipartisan Coalition lost control of the State Senate in 2012, it was a given that its Democratic members would see a big drop in the number of bills they got through. But that loss of clout may have also affected Democrats in the House. With the Legislature adjourned and a pile of bills awaiting the governor’s signature, here’s looks at how power shifted in the Capitol.

Rep. Chris Tuck sponsored about a dozen bills this past legislative cycle. Only a couple of those items ever got hearings, and just one – a bill dealing with craft distilleries – actually passed. As far as Democrats go, Tuck considers himself one of the lucky ones.

“You’d hope it would be like four to one, but unfortunately we feel blessed to even have a bill passed,” says Tuck.

Tuck is used to it. Democrats have been the minority party in the State House ever since the Nineties, and their caucus only occupies 10 of the House’s 40 seats right now.

Since 2006, the House Minority would get one bill passed per member, if you average it out. That’s only a small fraction of the legislation that gets passed, but it was something.

This Legislature, that number dropped. Instead of one bill a person, it’s now about half a bill. If you were a member of the Majority this Legislature, you were six times more likely to get a bill through.

So, what changed? While the composition of the House didn’t shift much in the last election, the makeup of the Senate did.

“It does have an effect that bleeds over to the House,” says Tuck.

Instead of having a Republican House working with a team of Democrats and moderate Republicans in the Senate, the Legislature effectively switched to one-party government with the last election.

Tuck thinks that means Minority members are less likely to have ownership over some of their policies, even if they introduced them first. For example, a bill requiring babies to be screened for heart defects was originally introduced by a House Democrat, but the version that passed was offered by a Senate Republican.

“It’s not as much about the policy as who gets credit for it,” says Tuck.

There are a few possible reasons for this. If a bill doesn’t have your name on it, it’s harder to campaign on it as a legislative accomplishment. It’s also easier to get a minority bill through one adversarial chamber than it is to get it through two of them. If a Democratic bill made it through the House during the Bipartisan Coalition days, then there was probably a sympathetic ear for it in the Senate.

These days? Not so much, says Tuck.

“A lot of people that were in the minority in the 27th Alaska Legislature are in the majority this year, and it’s all about retaliation in some form,” says Tuck.

In total, the House Minority got six bills passed this Legislature, and Senate Minority got zero. That’s out of nearly 200 bills.

In a lot of ways, that’s just the way the game is played. Wasilla Republican Charlie Huggins currently serves as the Senate President, but before the 2012 election, he was part of the Senate’s small conservative minority caucus.

“Obviously, in the minority you get to do a lot of observing – maybe grit your teeth every once in a while,” says Huggins.

Under the Bipartisan Coalition’s leadership, the Senate Minority fared a little better than the current Democratic Minority, but not by much.

Instead of getting zero bills through, they managed to pass anywhere from one to three bills per Legislature. On the rare occasions they were able to get their bills through the more Democratic Senate, those measures sailed through just fine in the Republican-led House.

Now that Republicans lead both chambers, some of the bills favored by the old conservative minority cleared the Legislature just fine. Huggins points to his bill naming an official state firearm as something that went nowhere in the Senate under the Bipartisan Coalition but passed handily this time around.

That bill wasn’t the only one that Republicans had previously pushed that passed this time around.

Of the 191 bills that passed this year, 21 had been introduced in the past but were effectively blocked by the Bipartisan Coalition.

“There was a lot of pent up frustration by average Alaskans that things weren’t getting through that they thought had merit, and we turned that around,” says Huggins.

Most of those bills were passed by the Republican House but then held up in Senate committees which were often run by Democrats.

The House passed a Stand Your Ground bill twice during the Coalition days, and only got it through this time around. A bill the puts time restrictions on foreign nationals’ drivers licenses also got new life. So did a bill furthering the development of the Knik Arm Bridge.

Legislation regulating abortion also passed for the first time in about a decade. Anchorage Democrat and Senate Minority Leader Hollis French says that would have “never gone anywhere” under the Bipartisan Coalition that he was part of. Abortion was one of the issues they specifically avoided to keep harmony in their ranks.

“The ground rules were that each party would set aside the extreme measures from each end of its own political spectrum. Which means that the Right would not be pursuing anti-abortion bills, the Left would not be pursuing say legalization of marijuana,” says French. “We would work from the middle, pursue ideas from the middle, pursue ideas that we could all agree on – building infrastructure, education, crime bills, and so forth that were mainstream.”

Huggins says the current Senate Majority doesn’t have any terms of engagement like that, mostly because they don’t need to as a Republican-led caucus. While there are differences of opinion within the caucus, many of top leadership positions are held by people who are ideologically aligned.

“You know, I think by and large the biggest contrast between the Bipartisan Coalition and what you saw in the last two years is you probably had more like-minded people who were in leadership and more influential in the body,” says Huggins.

GOOD YEAR FOR THE GOVERNOR

Of all the legislation that had been tried before under the Bipartisan Coalition, arguably the most significant one to pass was a variation Gov. Sean Parnell’s oil tax plan.

During the 2011 and 2012 legislative sessions, Parnell repeatedly clashed with the Bipartisan Coalition over his vision of oil tax reform, with the Senate ultimately blocking his attempts to cut taxes on oil production at high prices. With the 2012 election, six of the Bipartisan Coalition’s 16 members lost their seats under a new political map. Within one session of the new Republican members being sworn in, Parnell’s most recent version of his oil tax plan passed.

Parnell generally did better under the new Legislature, and he has frequently complimented the current political leadership. During the 27th Legislature, five out his 16 personal bills failed. This Legislature, just two of his 17 bills did not make it through the process – a water rights bill that received vocal public opposition, and a timber sale bill that his administration didn’t actively push for.

Huggins says there was frequent communication between the Parnell administration and legislative leadership, which resulted in less political gridlock.

“The governor provided some good input and gave a third set of eyes, if you will, on the administration’s standpoint on a number of issues,” says Huggins. 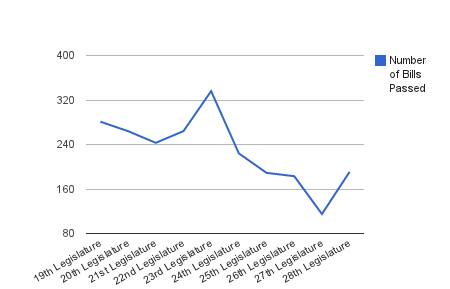 A Sitka fish processor lost everything in 2020. Now it’s planning a comeback.