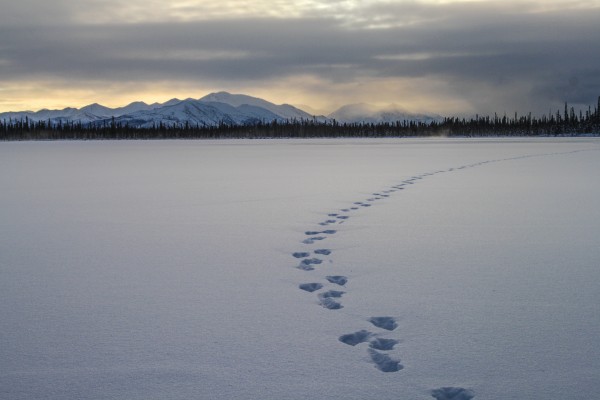 The woods after the first snowfall have a distinctive sound. The world becomes quieter, and any remaining sound is muffled, as though filtered through cotton. It’s in this new silence that I find myself snowshoeing through the trees. My headlight illuminates the forest ten feet in front of me — the entirety of my universe at this moment. Nightfall is arriving earlier every day here in Alaska, and these woods, now dark and covered with snow, seem strangely unfamiliar.

As I walk, I come upon tracks. With the recent winter storm, these tracks cannot be more than a day or two old. Here a squirrel raced from one spruce tree to the next. As a trapper, one begins to see the world through the eyes of the animals. I cannot help but think of the squirrel as he hopped through the snow. Was he full of fear as he moved through the open, looking skyward for an eagle or owl? Has he stored enough food for the winter? As I imagine him rushing over the snow, anxious and alone, I can almost sense that same feeling of trepidation running through my nerves.

Here an arctic hare made his way along the edge of the willows. It’s been years since I’ve seen many hare tracks on this mountainside, and their huge, soft prints bring a smile to my face. They’ve returned.

Hare populations increase and decline in an almost clock-like fashion. Some years their trails crisscross the snow like highways designed by a madman. The animals are pure white and difficult to see, so their roads and back alleys are usually the only sign that they share the woods with me. When they are abundant one can sense their presence from their shadows moving across the snow. Eventually though, their population will collapse. A combination of overpopulation and predation takes their toll, and one winter their tracks will be gone. It will be a few years before I will see their tracks again, and ten before they once again lay down their snowy highways.

The trapper lives within this same cycle of plenty and hardship. The populations of fox, lynx, and coyote mirror the populations of hare, shrew, and squirrel. Trappers must accept, just like the animals they pursue, that their will be lean years and abundant years. Some winters the landscape seems eerily empty — as though it has been entirely abandoned. Other years, signs of winter life is etched into the snow with myriad footprints. 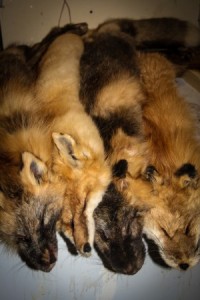 Trappers can help temper these cycles of overpopulation and collapse. Even to this day, trapping regulations usually stipulate no limit on the number of animals one can harvest in a season. It is up to the trapper to understand these cycles and not exploit the land. If an area is over-trapped, the breeding population of furbearers can no longer maintain itself and the animals will disappear. The landscape is out of balance, and will remain out of balance for some time.

Likewise, areas that remain untrapped suffer the worst of the boom and bust cycle. Without trappers to temper the number of predators, they can decimate the population of prey animals making the recovery of prey populations harder. Trapping, in some way, is stewardship of the land. It’s entering and participating in the natural cycles of the wilderness, while still being conscientious of it; making sure one never takes too much…

As I continue to walk, I come across fox tracks. A line of deep, straight dimples stretch across the snow in either direction from me. As I follow the tracks, I once again see the world from eyes other than my own. Where was he headed? Was he simply strolling through his territory, enjoying the silence as I do now? Perhaps he was hungry, cocking his head to one side to catch the impossibly faint sound of a shrew beneath the snow. I do not know, but I play all these scenarios through my mind, trying to enter his.

In a world where we think of all knowledge as coldly scientific, a trapper, hunter, or fisherman holds knowledge that is deeply personal. The favorite tree of the resident grouse. The small creek that never seems to freeze. The unpicked harvest of cranberries still on the bush. A trapper find a small piece of earth and lets it teach him. In this way, those lonely souls walking the woods at night carry a knowledge that is deeply personal and utterly unique. They “know” a landscape in a way no one else does.

Many people think of trapping as an activity that is somehow exploitative and wasteful. The idea of harvesting an animal for its fur, in the era of Gore-tex and nylon, seems unnecessary. They visualize scared-looking animals in traps, their dignity stripped from them. The reality of trapping is far more complex.

When I come upon my catch, there is a mix of emotions. Certainly there is a feeling of pride. I’ve learned what the landscape has been able to teach me. All the scouting, preparation, and work have not been in vain. I’ve entered the animal’s world and have played a fair game.

Often that pride is accompanied by sadness. I’ve spent weeks, maybe months, playing the game and now the game is over. His tracks will disappear from the landscape, hopefully to be replaced next year.

Above all, there is a feeling of respect for the animal. Touching its coat, feeling the softness and warmth, one cannot help but respect an animal that can thrive is such conditions. Every time I catch an animal, I carry it home in my arms. Part of this is pragmatic — I don’t want to damage the fur — but part of it is symbolic. The animal, whose life has been long extinguished, still deserves respect. Many emotions run through me in quick succession as I cradle it in my arms.

Trapping essentially centers around mortality, and I don’t think that fact is lost on many trappers. Trappers delight in a “clean catch,” where the animal was quickly killed and didn’t suffer much. Likewise, one is filled with remorse when one occasionally catches an animal improperly and it’s death was unnecessarily long.

I think about mortality a lot while I’m on the trapline. As I watch relatives die from cancer, as I notice parents getting older and slower, and as I carefully lift the stiff and cold weight of a fox out of the snow, I cannot help but think about death. How will I go? The trapline has illuminated my thoughts on my own ending. My hopes for the fox and myself are the same. In the end, I’m just hoping for a “clean catch.”

Skinning the animal is equally respectful. A well-skinned fur will fetch far higher prices than a sloppy one, but the ritual is more than that. It takes me about an hour and half to skin a fox. Every movement is a gentle one as I use my knife and my fingers to slowly undress it. Its scent fills my nostrils. I fuss and worry over it. For time to time, and step back purely to admire it.

Once the skin is off, stretched and dry, I take a hair brush and softly comb the hair backwards, revealing the thickness of the fur. It is a final ritual before I put the fur up, to be tanned or sold.

Once the fox is skinned, I take the carcass and strap it to my backpack or sled. I bring him back to woods, using him as bait for another set. Chances are, the ravens and eagles will get to him first. Most of him is returned to the land from which he came…

Tonight, however, my snares are empty. The fox has been hunting another part of his territory, and his tracks merely pass through this piece of woods. I leave the forest and pull my frosty hat off my head. Behind me, the quiet forest — my tracks mingling with his.