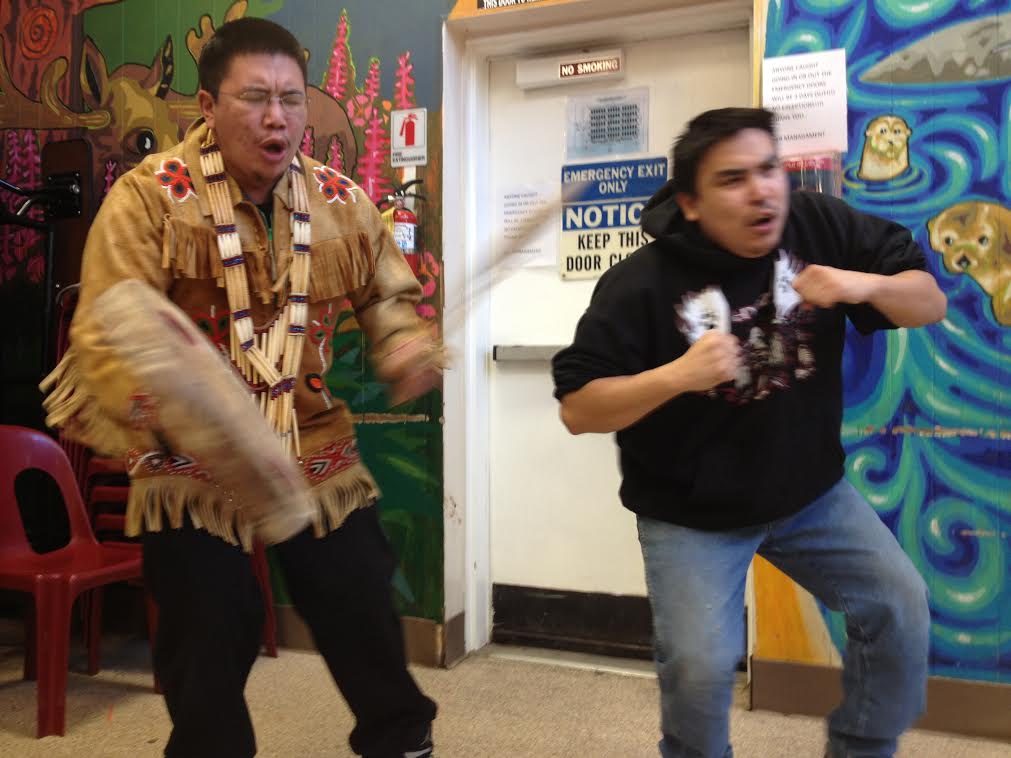 At midday, huge crowds of homeless men and women filter inside Beans Cafe in downtown Anchorage for meals and socializing. It can be noisy and chaotic. For many, it’s their only respite from the cold and dust outside on the city streets. But once a week, volunteers recently began serving up more than a hot meal. KSKA’s Daysha Eaton has the story. 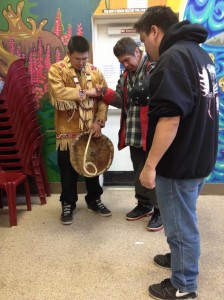 Some of the homeless people ask about his jacket, others about his drum with the word Ahtna scrolled across the front and two red feathers on either side. Even more gather round when he brings out his stick and starts pounding out the beat.

His cousin Andrew wears a black hoodie and dances and sings at his side. During a recent one-day point in time survey, The Alaska Housing Finance Corporation found the majority of chronically homeless people in Anchorage – Around 70 percent of the 700 or so homeless people surveyed – self-identified as Alaska Native. Johns noticed too. He says he got the idea to start drumming at Beans while volunteering there a few weeks ago. At the end of the song, the audience let out sounds of approval.

28-year-old Johns grew up in Copper Center, or as he calls it Kluti Kaah. He is Ahtna and Gwich’en Athabascan. By his own account, Johns could have been among the men and women with substance abuse issues at beans. He spent his youth drinking to numb out emotions, he says, he did not know how to deal with. Traditional songs, drumming, dancing helped him find connection again get sober when he was 21. He says he was apprehensive about how he’d be received but something cool happened when he started drumming and singing at Beans.

“I just started singing. And it amazed me the respect that I got and the quietness that happened.”

Quietness followed by request after request for traditional Native songs from every corner of Alaska. Ed Pratt, who says he’s Tlingit from Huna and Juneau asked Johns to play a song to honor a friend who recently died. 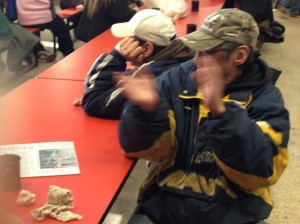 Vernita Ballot who is Inupaq from Selawik, likes the drumming too.

“Driving me crazy. In a good, beautiful way. (Daysha: Does it remind you of home?) It remind me a lot of the way long ago people, Inupaq people, they used to drum too and dance. They taught me how. I know a little bit about it. But you know just to hear them drummin’ – it’s beautiful. I love it. Made me feel young again (laughs).”

“Our Native dancing and drumming, long ago, was kind of our form of going to church.”

Tiulana’s learned traditional drumming from his grandparents who come from King Island while he was growing up in Anchorage. He says they taught him that drums are used to replicate the sound of your mother’s heartbeat – that they help you relax, release energy and feel connection. With Alaska Native culture still in a transition from traditional to modern times, Tiulana says, the drum is a connection to healthy traditions and finding a way forward. 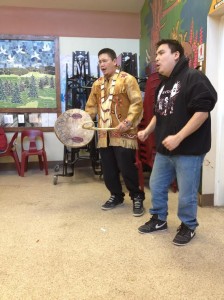 “Physical abuse, mental abuse, alcohol, drug abuse. You know, These things we tend to get lost in. And then we are disconnected from our culture. But when we hear our drumming and our singing, that fills an empty spot in our heart.”

A spot Johns says he’s excited to help fill with his drum.

“Our drum is like Medicine. Our drum is a tool for healing. And that’s what I was telling them while we were down there. You don’t just buy this thing at a store. You don’t get this at the hospital. It’s something that’s been passed down from generation to generation for a reason.”

Johns only knows songs from his region. He hopes Alaska Native people from other regions will join him to drum, sing and dance with the people at Beans Cafe soon.