If you are lucky enough to get a permit, the McNeil River Sanctuary in Southwest Alaska offers an opportunity to safely get up close and personal with the largest congregation of brown bears in the world.

Since only 185 permits are drawn each year, a UAA professor decided to team up with an Alaskan filmmaker to create an immersive experience for those who can’t make the trip. 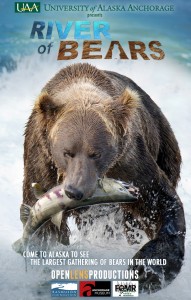 When you go to a planetarium, you expect to learn about the night sky, but, as I sit down in UAA’s planetarium, the lights are dimmed and the ceiling lights up with a view of the McNeil River in Southwest Alaska.

Travis Rector is a professor of physics and astronomy at UAA as well as the producer of “River of Bears.” He says the purpose of the planetarium is much broader than just studying the stars.

“One of the things that we can do in our planetarium is we can give people the experience of being anywhere, whether it be an orbit around the earth, or far side of the galaxy, underneath the ocean, or even at a bear sanctuary,” Rector said.

“River of Bears” is the first wildlife documentary ever produced specifically for a planetarium.

Rector and filmmaker Jonathan VanBallenbergh used a special video set up mixed with photographs to take advantage of the planetarium’s domed ceiling and 360 degree view. Rector said that technology allows viewers to immerse themselves in the full McNeil River experience – from the flight in, to time sitting in camp, to the bear viewing areas.

“One of the special experiences about McNeil River is that it teaches you how to watch; it teaches you how to be perceptive about what’s going on around you,” Rector said. “And we tried to convey that feeling in the movie where as you’re watching the show there’s all these things happening, and if you take the time to look around, you’ll see lots of neat little things.”

Rector said because the McNeil River changes as the season progresses, it took the crew two trips to get the material they needed to put the documentary together.

“In the early season, when the bears are at Mikfik Creek, the focus is on grazing and mating, and then as the season progresses, as you start to get into July, the salmon start to run into McNeil River and that’s when the bear viewing switches out to the pads at McNeil Falls,” Rector said.

Even though bears will sometimes come to within feet of the viewing areas, they mostly ignore people. This is largely because of the way the Department of Fish and Game manages the human activity in the area. In the nearly 50-year history of the sanctuary, no one has been injured by a bear at McNeil River.

Despite the refuge’s safety record, Rector says the thought of being surrounded by bears for four days is off-putting for some.

“When you describe the experience that you fly out to this remote location in Alaska and then you sleep in a tent in bear country, that alone makes many people say, ‘there’s no way I would ever consider doing that that,’” Rector said. “And so there’s a lot of people, whether it be the lottery system, or expense, or fear, or physical ability, will never get the chance to experience what there is to experience at McNeil.”

Rector says the goal of “River of Bears” is to bring the experience to that audience.

The show opens Friday at the UAA Planetarium and Visualization Theater.