A 38-unit apartment complex burned down in the Anchorage neighborhood of Mountain View last month, leaving dozens of people homeless.

So far this year, there have been 20 fire calls to multifamily dwellings where the fire spread beyond the room where it started and at least five of them did major damage. All the fires burned older buildings that don’t have to meet modern fire code standards.

“We had an apartment fire back here in this courtyard in the center in the top floor that was extending left and right,” Balega said. “And by the time we had units – the secondary units start showing up we had fire spreading into these east west branches, so that was pretty quick.”

He’s investigating the cause while cleanup crews sweep debris out of the way. Balega says even though fire fighters responded in just three to five minutes, they couldn’t stop the blaze. The building was a total loss. 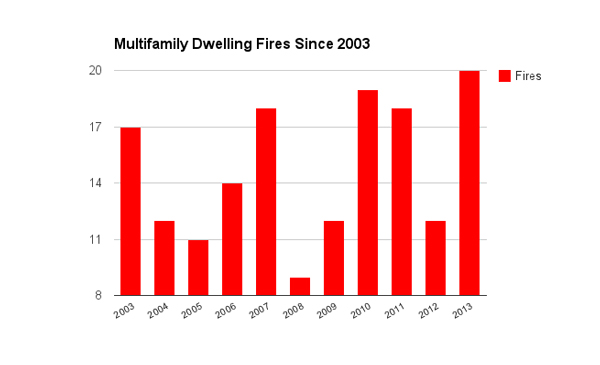 This year there have been 20 fire calls to multi-family dwellings where the fire spread beyond the room of origin. That’s nearly double last year’s number and more than any other year in the past decade.

So far, nobody has died in the fires, but seven people were injured. Loss to property and contents combined is estimated at more than $8 million.

“If we would have had a draft stop, in, halfway in this structure to our left, your left, my right, we probably would have had fire stopping halfway on that building and the other half would be saved,” Balega said. “Yeah, they work, if they’re there.”

So why aren’t they there?

Anchorage fire code grandfathers in older apartment complexes. There have been at least four similar fires to the one at 221 Meyer street in Anchorage this year. The buildings that burned were built from the 50s to the 80s.

Fire Marshal James Gray says Anchorage fire code as it stands, is a collaborative process that involves lots of different stakeholders, and there are limits to what the public and the building community will tolerate.

“Correction of construction deficiencies, correction of fire sprinkler, lack of fire sprinkler, or lack of fire alarm are fairly onerous requirements to put on building owners,” Grays said. “So they try to give credit for as many existing provisions that you have in the building and they don’t make you put in those retroactive requirements until you hit a certain level.”

Glynwood Manor had been inspected last year and it passed. But sometimes, Gray says he’s understaffed and his department can’t inspect buildings every three years like it’s supposed to.

Anchorage fire code is based on the International Fire Code. It’s updated every three years and approved by the Anchorage Assembly. Jonathan Steele helps write it. He’s an architect with the firm Bettisworth North and a member of the Municipal Building Board. Of the 47 chapters in the Anchorage fire code, he says one chapter is devoted to upgrades to older apartment buildings. It works like this.

“Once a building has been designed and permitted, as long as it’s use doesn’t change they don’t have to do anything other than these mandatory upgrades that are in a very small section of the code,” Steele said.

In the case of the Glynwood Manor fire, even though it had 38 units, which would normally require some safety upgrades – each unit had an exit to the outside. And, according to the code, that exempted the building from the upgrades that could have likely stopped the huge fire. Steele says, with all the big apartment fires lately in older buildings, things might need to change.

But without making the code more strict, more inspections wouldn’t help much. Fire officials say four out of five of the apartment building fires that KSKA investigated for this story had building-wide fire alarms. None, including Glynwood Manor in Mountain View, had draft stops or sprinkler systems.

Fire Inspector Balega says that could have made a difference.

“If those were in here the potential for us only to have damaged a portion of this building would have been a lot better for us,” Balega said.

The cause of the Glynwood Manor fire is still under investigation.

The Red Cross shelter that housed residents left homeless by the fire closed this past Saturday. A few families are still trying to find housing.

The Institute of Real Estate Management, which represents owners and managers of apartment complexes, in Anchorage was contacted for this story and did not return repeated phone calls. Neither did Victor and Rhonda Smith, the owners of Glynwood Manor. The Smiths own several other older rental properties in Anchorage.