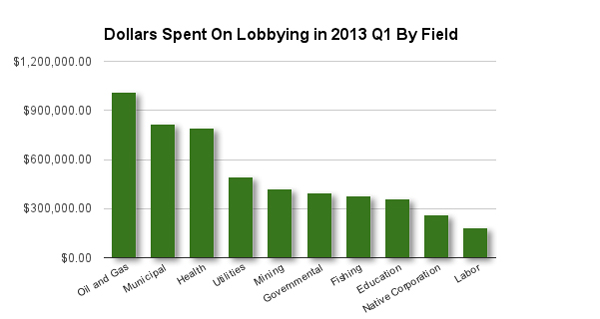 If you want to find out just how much money different interest groups spend lobbying the state legislature, you have two options. You can request specific filings from the Alaska Public Offices Commission during regular business hours, or you can wait until the end of the year for them to release their annual spending document. Both take patience of one kind or another, as APRN’s Alexandra Gutierrez learned when she set out to examine the effect money has on state politics.

When it comes to lobbying and transparency, Alaska gets a “C” grade.

“It means that some basics are available, but that it’s not extremely citizen friendly.”

Gordon Witkin works for the Center for Public Integrity, and his organization has produced corruption report cards for every state in the country. One thing they examined was how out in the open lobbying was.

As far as disclosure laws are concerned, Alaska actually does better than most states. Lobbyists are required to register with the state and file monthly reports. The companies that hire them also have to check in with the Alaska Public Offices Commission, or APOC, every quarter.

But if the state were only graded on how well it gets that information out to the public, it would be failing.

“‘In practice, lobbying disclosure documents are accessible to the public online, in a meaningful and accessible manner.’ We gave Alaska a 50 out of 100 on that. Perhaps on that last question, Alaska should have gotten even a lower score.”

I would use more colorful words than “meaningful” and “accessible” to describe my own experience trying to get the information. I had a couple of simple questions in mind: How much money was spent lobbying this session, and who spent the most? Getting the answers took multiple phone calls, multiple e-mails, and two office visits.

When it comes to campaign finance, APOC posts every report filed. And if you want to play with the data, you can export that data into a spreadsheet. The system’s a little byzantine, and the amount of information can be overwhelming, but it’s all there. That’s not the case with lobbying. Not a single report is online, or even accessible from APOC’s public computers. While that information could be automatically posted on APOC’s website in real time, that would expose the state employee server to a security risk the way the system’s currently set up. Instead, a staff member has to go in, format everything you want, and then print it or email it to you. That’s a huge effort when you’re trying to make sense of hundreds of reports.

Paul Dauphinais is APOC’s executive director, and he actually agrees with the Center for Public Integrity’s assessment. He says part of the problem is their system hasn’t had a facelift since it was introduced, and that a lot of its value has been as a guinea pig for their other electronic reporting systems.

“That was the first electronic system APOC had. So it meant much of what we learned from that system went into the candidate system.”

Dauphinais recognizes that there are obstacles for members of the public who want to study the information they have on file. He says he understands why people can get frustrated when it takes 10 clicks of the mouse to navigate APOC’s website.

On top of the infrastructure problem, there are also policy reasons there isn’t much lobbying data out there. Statute mandates APOC to produce an annual summary of how much companies are spending, so they don’t do anything more than that. That analysis also comes long after the legislative session wraps up and after voters have already cast their ballots in election years. Also, any reports APOC does release? They’re in PDF format to keep people from altering the data. Kathy Kiely works for the Sunlight Foundation, a DC-based good government outfit, and she explains why that’s a problem.

“That’s the worst kind of a thing, because it’s effectively a picture of data and not data. And it means that you have to go through torturous methods to try to get those names and numbers — all that information — into a form where you can work with it. So, it’s kind of like a non-disclosure disclosure.” 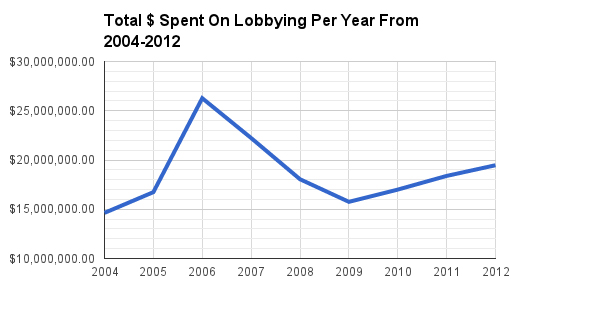 So, what would an ideal system for getting this information look like?

“You want [the data] not only available, but available in a format that allows people to mash it up with other data sets — in other words, to connect the dots — in ways that make patterns of influence transparent to voters,” says Kiely.

Dauphinais says APOC is now looking at just how to do that, and that they’re at the earliest stages of a revamp. No capital money has been dedicated to a web overhaul, and details are scarce. But Dauphinais will say APOC staff is trying to find easy fixes to their system.

“We — people at APOC — work with this stuff every day. And we have our own shorthand, and we think about it one way. But that is not even close to the way the general public is going to think about it. And we need to get outside of our own head. ‘Oh, it’s easy. We just go to lobbyist or employer, and we do this, and we do that.’ But you don’t do it every day.”

And Dauphinais stresses that he really would like for citizens to regularly check out all the information APOC collects.

“After all it is the public’s data, and we do want them to use it.”

It’s just a question of how long it’ll take.