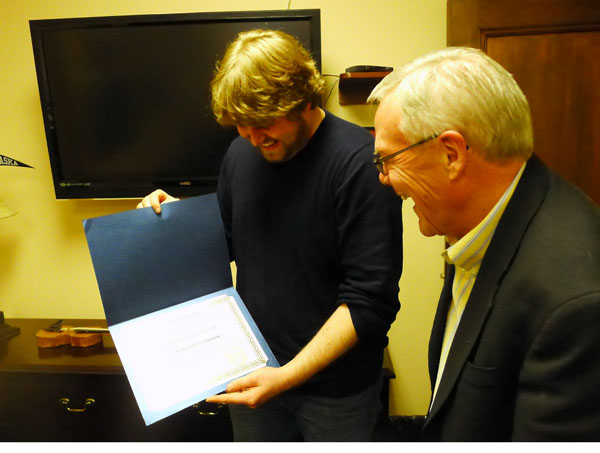 At the onset of World War II, the territory of Alaska was seen as too big, too remote, and too sparsely populated to defend. That is, until it was attacked by Japanese forces. In response, a few thousand residents came together to form the Alaska Territorial Guard. Once the war was over, the guard disbanded, and those who served went back to their daily lives. But they were never formally released from duty. Decades later, these guardsmen are now finally getting their discharge papers. APRN’s Alexandra Gutierrez reports that some notable Alaskans are among them.

When Dennis Egan opened up some official looking mail before heading into work last week, he wasn’t expecting to find his late father’s discharge papers.

“It was this formal U.S. government [package], and I’m thinking, ‘Oh my God, I’ve been summoned to jury duty.’ So, I open this box, and there it is. And I just broke down, in fact, I didn’t even come in.”

Dennis, a state senator who represents Juneau, knew that his dad Bill was part of the Alaska Territorial Guard. Before serving as delegate to the constitutional convention and then as the state’s first governor, Bill Egan had flown planes during World War II. He even earned a medal for making it through a kamikaze attack. Dennis figured his dad had been released from service when the war ended, and that the papers had just been lost back in 1964.

“I didn’t have a clue,” says Egan. “I thought all this thought was just destroyed in the earthquake in their home in Valdez.”

Bill Egan isn’t the only member of the territorial guard not to have his discharge papers. He’s one of six thousand. After the war, the guardsmen were thanked for their help with the war effort, but there was no formal paperwork documenting that their service had come to an end.

“They were busy. They were trying to protect us,” says Egan. “They weren’t too worried about fancy medals and crap back then. And things were just overlooked.” 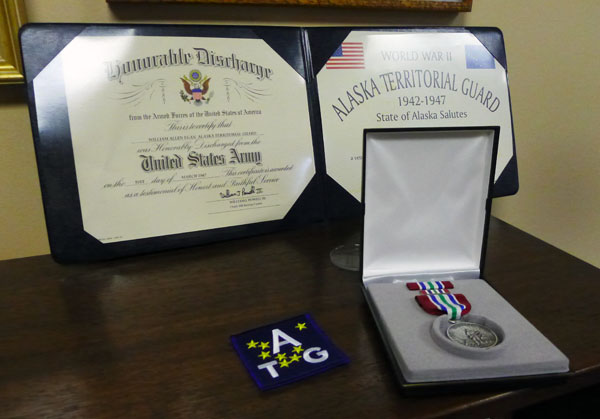 Back in 2000, Congress passed a bill to rectify that. It requires the Secretary of Defense to issue discharges to everyone who had served in the Territorial Guard. Those papers let living guardsmen apply for benefits available to every other veteran of World War II, and they also carry a lot of emotional significance for family members of guardsmen who have already passed.

Verdie Bowen directs the Alaska Office of Veterans Affairs, and he’s in charge of the effort. So far, they’ve completed more than 1,500 discharges. With so much time since the war, it’s been tough tracking down every member of the guard. He says that often, relatives of deceased guardsmen don’t even realize their family members served. That hit home at one ceremony he was involved in last year.

“What caught me off guard was the crew chief, who was on the Black Hawk helicopter that is currently serving the Alaska National Guard, stood there and did not realize that his grandfather had served in the Alaska Territorial Guard,” says Bowen. “He didn’t know we were presenting that medal to his grandfather when we flew in.”

Bowen says that the Territorial Guard was critical to the war effort, and that there’s no reason to treat them differently from veterans in other states. They came from a hundred different communities, stretching from Ketchikan to Barrow, and they served without pay. They picked up downed pilots, they reported on the movements of Japanese ships, and shot down fire balloons.

Dennis Egan wishes he knew more about that history and his father’s time in the Territorial Guard. Bill died in 1984, and he didn’t really talk much about the war when he was alive. That’s part of why it was only this year that Dennis learned his dad had never been discharged. He says that even though it’s been so long since the war and so long since his father passed, he’s glad to have these papers now and thankful for the connection. 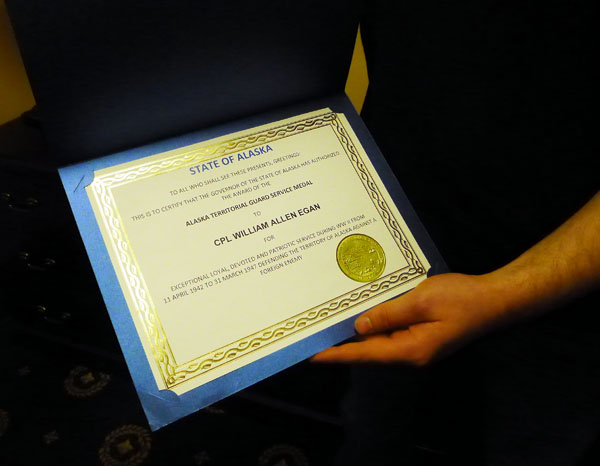