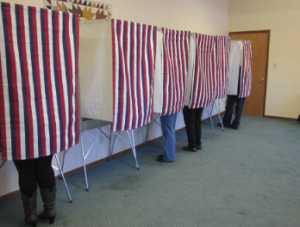 The Anchorage Assembly got an update on how the review of ballots from last week’s election is going at last night’s regular Assembly meeting. KSKA’s Daysha Eaton has more.
They’re still reviewing ballots from last week’s election at City Hall. Anchorage Clerk Barbara Jones briefed the Assembly on the work of the election commission and the clerk’s office since last Tuesday’s municipal election. Jones said officials have been reviewing absentee and questioned ballots and they’re preparing for the public canvas on Thursday.

“There’s approximately 50 votes that are in the process of being reviewed to be rejected. The public session of canvas will be held on Thursday, April 11th from six until seven, or until completed in the assembly conference room 155 at City Hall.”

The total number of questioned ballots cast on election at precincts on election day is just over 1-thousand. There were 48-hundred in-person and by-mail absentee ballots issued throughout the city. People whose ballots are being questioned are being notified so that they may appear at the canvas to defend their votes. Jones says, after the public session of canvas is finished on Friday, officials will run the remaining question and absentee ballots through an AccuVote machine for a final count. Saturday, the hand-count of the close race in the West Anchorage Assembly District begins. Just 93 votes separate Assembly Chair Ernie Hall and Write-in Candidate Nick Moe in the race. The hand count begins at at 8:30 am at City Hall and runs until 5pm. It is open to the public.