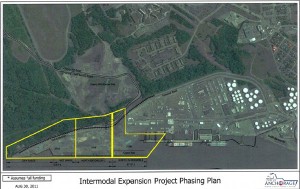 Kirkland, Washington-based MKB Constructors was a sub-contractor under Integrated Concepts and Research Corporation, or ICRC. ICRC is being sued by the Municipality of Anchorage, along with CH2M Hill Alaska, and PND Engineers. MKB Construction’s main job was to drive sheet piles into the floor of Cook Inlet, creating part of the base for the new port.

Andy Romine was the on-site Project Manager for MKB. He defends his company’s construction work and takes issue with the construction companies being referred to as inexperienced.

“They even talk about it a little bit in the lawsuit,” Romine said. “They want to say that it was an inexperienced contractor that caused part of the problem and I just don’t agree with that.”

Romine says he had worked on six similar projects and his crew were union employees from the local pile drivers and operators unions. There were multiple problems with the project, which used a patented ‘open cell sheet pile’ design. Everyone agrees that some sheets of metal, driven into the ground crumpled and separated during construction.

In a previous story a spokesman for Anchorage-based PND Engineers defended their design and faulted incorrect installation by construction contractors, saying they should have used a barge from the water side, which is a method that had been proven successful, but Romine says that’s not true.

“There’s one common thing that everybody’s saying — the engineer says it, CH2M Hill said it, MKB said it. When we built the project off of the land-based work platforms, which were the anticipated method of construction included in the contract documents, it didn’t work. Who is responsible? Everybody probably has an opinion, but there’s one thing that everybody agrees on, that that’s not the way to do that project at the Port of Anchorage,” Romine said.

The administration of Anchorage Mayor Dan Sullivan has led the push to get the Municipality reimbursed for its losses.