Our family moved from Long Beach, California to Anchorage in the fall of 1946. My parents worked for the Civil Service, but soon left those jobs and purchased the Larsen Alaskan Distributors flying school and local Piper Aircraft dealership, located at Merrill Field. They owned and operated this enterprise from 1947 to 1949 while I was between the ages of 5 and 7 years old.

Where my father had ever learned to fly, I don’t know. But I do know that he flew around Alaska for years after owning this school and the pilots on Alaska Airlines and Reeve Aleutian Airways were always happy to have him fly the ‘right seat’ of their DC-3s or other commercial planes on these trips. Many times he recounted harrowing trips to Bethel on the Kuskokwim River delta, to Bristol Bay or out to one of the Aleutian islands where fog, high winds, lack of radio communications and periodic mechanical failures all did their best to down the craft.

Apparently, my mother was good at office management and bookkeeping, as she assumed these functions at the flying school (and at later family-run businesses, as well.)

On several occasions my dad and another pilot from the school would go back to Lock Haven, Pennsylvania, where Piper Aircraft had their factory, and ferry a couple of planes back up to Alaska. These were long, slow trips that had them flying low under the clouds to follow the highways and often landing in fields to service and refuel their planes. As a youngster I could not appreciate the dangers they faced; to me it just sounded so exciting! At other times a ferry pilot from Piper would bring a plane up to us. One of these pilots was Juanita Pritchard Bailey, a Civil Air Patrol pilot during the war. She went on to be a Life Member of The Ninety-Nines, a member of the “Silver Wings Fraternity” and a member of OX5 which awarded her the Pioneer Woman of the Year award in 1995.

The air field was named for Russell Merrill, an early pioneer in Alaskan aviation who disappeared while en route from Anchorage to Bethel, Alaska, in 1929. The field could accommodate all the little, single engine, single wing and bi-wing airplanes of the era as well as the larger Army Air Corps planes. I remember seeing several huge bombers and some transport planes; in retrospect I was most likely seeing Mitchell B-25s, some Boeing B-17s, Douglas DC-3s and the like. While not large by today’s standards, to a five year old these were indeed ‘huge’.

Behind the school, perhaps ten or fifteen yards, was the embankment that dropped sharply down to the tide flats that housed, and perhaps still house, the city’s water and electric departments. The city’s principal main street, Fourth Avenue, followed the lower part of the hill down and across these flats and up the other side to Government Housing. Fifth Avenue, following the crest of the hill, took you towards the Chugach Range and the two military bases, Fort Richardson Army Base and Elmendorf Air Force Base.

Sitting nestled under the small trees that lined this embankment were three or four hulks of vintage Air Corps planes. Their engines had been taken from them long ago, their instrument panels gutted, turrets emptied and several years of litter had been deposited on their interior floorboards. But to me, they were new, pristine and ready to fly. Years before I had ever heard of Walter Mitty, I heard the roar of their 16 cylinder Lycoming engines and saw the spit of fire from their monstrous 12 cylinder radial engines. They were my first glimpse of heaven, and I spent many hours talking on their lifeless intercom systems, pushing and pulling on their yokes to make the disabled flaps and disconnected ailerons move up and down, and hearing the cough, sputter and rumble of their mighty power plants as I pushed their throttles forward.

The flying school had, or had access to, a number of small, single engine planes that were either owned by the school, by the several instructors at the school or by whomever else that I don’t know. I do know that I saw and rode in many of the popular aircraft of that era, including Aeronca, Piper Cub (the PA-11 of military parlance), Taylorcraft, Aercoupe and others. Most of these small planes had several traits in common: Tubular construction with painted fabric “skin”, small in-line Continental engine that produced under 100 horsepower (most likely under 60 hp, if truth be known), tandem seating for two, wooden “fixed pitch” propeller, two struts under the forward passenger compartment that held the main landing gear and a drag bar or small drag wheel under the tail – hence, the name “taildragger” for this type of plane. The school’s planes were parked on a partly grassy, partly graveled lot in front of and beside the school, and had to be taxied across Fifth Avenue in order to take off.

In all of these small planes, as I would soon learn, the pilot many times preferred to sit in the rear seat nearest the center of balance. He stowed his luggage either on the front seat or in the small, open area directly behind the back seat. While instruments and full controls were provided to the front seat, the rear seat had only a stick, rudder and brake pedals. These planes did not have conventional doors on hinges that opened ‘out’; instead, they usually had a door that was hinged at the top and had a long, horizontal hinge so it folded in the middle, with the handle at the bottom of the door at about the pilot seat’s cushion level. The door covered an area from the forward edge of the front seat cushion to about the middle of the rear seat cushion. Thus, to enter or exit, you would twist the handle, pull the door up so it folded at the middle hinge, duck down and climb in or step out.

The fabric skin of these planes was subject to tearing and was constantly being patched in the shop area at the rear of the school. Many times I would become intoxicated by the fumes emanating from the nitrate dope glue used to hold the fabric to the tubular frames, and the butyrate dope sprayed on the fabric to seal and stiffen it prior to painting: My olfactory senses still love that overpowering smell.

Most, if not all, of the instructors were young men who were veterans of the Army Air Corps and had more grit and daring than good sense, as some of their ensuing tales will demonstrate. One of the instructor pilots preferred to fly the Aercoupe which was more stubby than the Cub or Taylorcraft. Often he would come in for a landing to the south on the north/south runway, flying at 20 feet or less altitude across the log school building and busy (for 1947, at least!) Fifth Avenue, his plane turned to the side so he was actually coming in sideways (side slipping his landing, they called it), and plopping down in a storm of dust and a shower of loose gravel. He’d quickly turn around, gun the engine and taxi back across the street to park in front of the school doorway. Such was his affinity for the Aercoupe that, whenever he could not be located or accounted for we always checked first to see what plane was missing, as this pilot always flew de coupe! 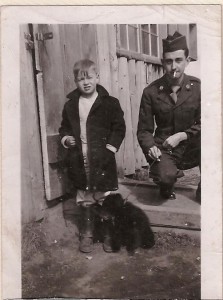 Another pilot was Mortimer Moore, nicknamed Moose. While to a 5 year old all adults are tall, this guy was towering! Later I was told he was over 6 foot 8 inches tall and weighed in at nearly three hundred pounds. Yet, he loved flying these small aircraft and was, by all reputes, an excellent pilot. He and his family lived far out of Anchorage in the foothills of the Chugach mountains, barely reachable by motor vehicle and miles too far away for telephone service. If he had a student who wanted a lesson that would keep him from being home at the time he had told her previously, he would swoop low over their house and drop messages tied to pipe wrenches, screw drivers, rocks or whatever else he had at hand while his long suffering wife – usually with their newest child on her hip – would wave to him and blow kisses from the ground just yards below.

It was from Moose Moore that I received my first, and only, black bear cub. Here is a picture of me standing in front of the school’s door: Bundled up in my wool coat, I had been patting the small bear cub on the head with gentleness of hand and stoutness of heart. Beside us is one of the Army pilots who flew for the school.