A note to Downton Abbey fans from the Founder and Editor of America’s Test Kitchen, Christopher Kimball:

I admit to being old enough to remember the first run of Upstairs, Downstairs as well as the incomparable The Duchess of Duke Street, which says something, I suppose, more about my age than my memory. However, the appeal of an enormous manor house with a kitchen harboring a coal stove the size of a small locomotive is undeniably appealing. Food was, indeed, the center of high-end Victorian and Edwardian living and a first-rate cook was in high demand. 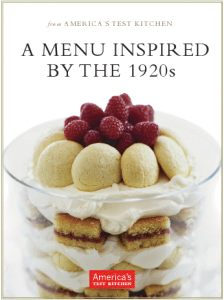 If you are anything like me, you watch Downton Abbey on Masterpiece with a particular keen eye for the kitchen scenes, to suss out the techniques and the cookware, to look over the array of pastries, to watch Mrs. Patmore instruct Daisy in the finer points of baking, and to soak up the warm, enviable world of the Downton Abbey kitchen. I can feel the heat from the coal stove and the enshrouding warmth from the staff as they go about their jobs, side by side. It reminds me of why I love to cook – hard work and lessons learned result in immediate gratification and, of course, dinner. Good cooking satisfies on many levels.

I present this simple menu as a typical offering from the 1920s – shrimp cocktail, a crown roast of pork, dressed vegetables, dinner rolls, and a trifle for dessert. This menu is quite approachable – you won’t need a staff of 10 to clarify stock, make elaborate pastries, or pull feathers from a pheasant!

Finally, I offer a toast to public television, to its enduring legacy of quality, and, most of all, to creating a place where we can visit together in a community of souls who love good entertainment, good food, and a commercial-free experience. Public television was a good idea almost a half century ago and it is an even better idea today.