Boaters may have noticed gray, dead-looking trees on islands north of Ketchikan. Like other parts of Southeast Alaska in recent years, Western hemlock trees on those islands are suffering a sawfly infestation. But U.S. Forest Service officials say it’s normal, and not a cause for concern.

A team of scientists from the Forest Service visited Hump, Joe and Grant Islands this fall, responding to reports of dead hemlock trees. It turns out the trees just look dead. Hungry sawflies have stripped the needles, leaving gray, but living, branches behind.

Silviculturist Sheila Spores said the team positively identified the culprit as the hemlock sawfly, “which is a common defoliator of the forest up here on the Tongass. This is the second year of a hemlock sawfly outbreak, but this year was the first year it was spotted in Ketchikan.”

The trees are expected to recover, for the most part.

“The hemlock sawfly comes in, it feeds on the needles and it makes the tree appear to be dead, but it’s just caused the tree to lose its needles,” she said. “Oftentimes, it’ll just be able to regrow its leaves the next year.”

A damaged tree’s growth will slow down, and Spores said in extreme cases, the top of the tree might die. She said a sawfly epidemic is natural to the forest, and this isn’t the first time it’s happened.

Spores estimated about 150 acres were hit this year in the Ketchikan area.

She said similar damage was noted last year on Etolin, Zarembo and Wrangell islands. When scientists visited those areas again this year, the same stands had been left alone, although neighboring trees had been hit.

Entomologist Elizabeth Graham, one of the scientists who visited the affected islands, said hemlock sawflies are native to Southeast Alaska. The adults are small wasps, and the larvae look like caterpillars.

“So the adults lay their eggs in it.” 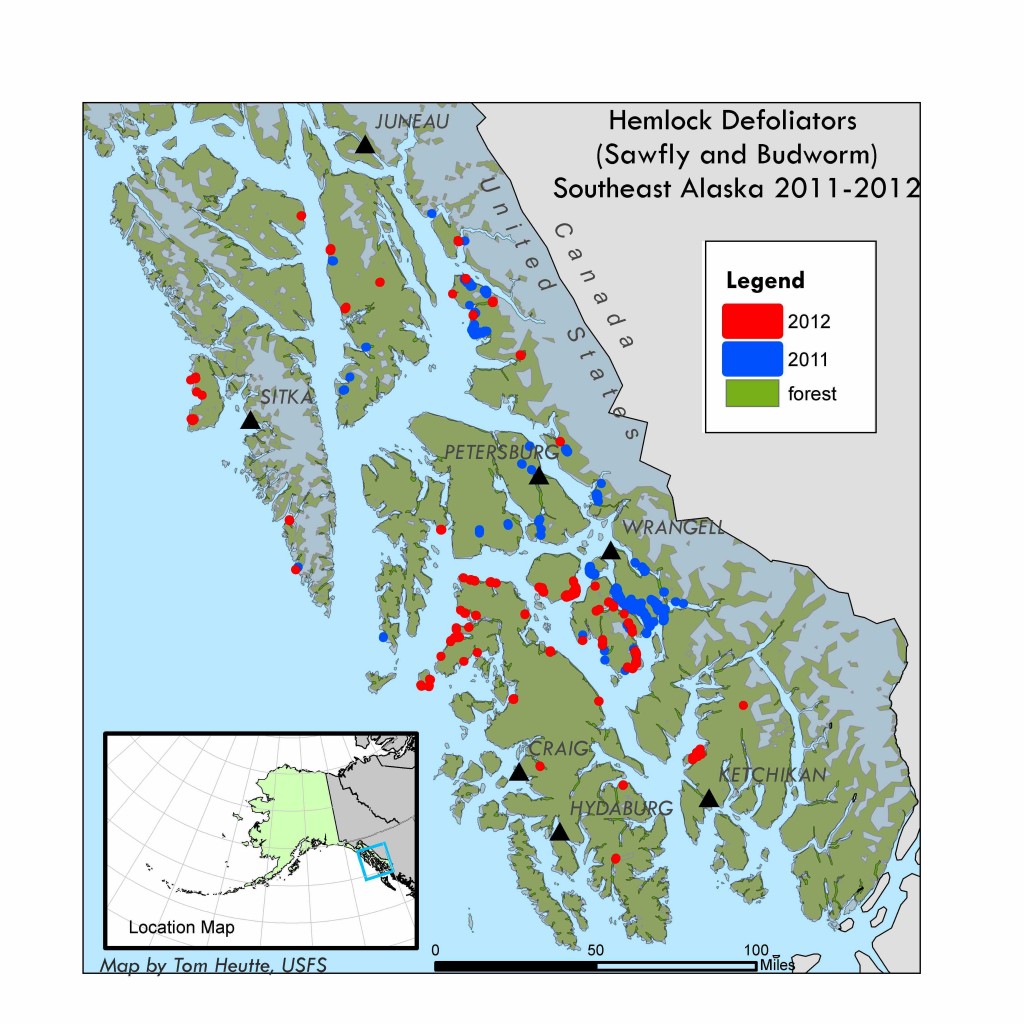 In the late summer, the larvae pupate and eventually hatch into adult sawflies. Graham said there are natural controls to sawfly epidemics.he fall, the larvae hatch in the summer and then start feeding,” she said. “They actually feed in groups, so you have almost a mass of little larvae feeding together on branches. Large populations can pretty much strip trees.”

“We have about 20 different species of parasitoids that we know will attack either the larvae or the pupae, so that helps to knock down populations when they tend to get so large that we see these large amounts of defoliation,” she said.

Evidence of those parasites and fungal infections was found in samples Graham collected during the site visit.

While the bugs damage hemlock trees, she said they also provide some benefits.

“A lot of birds and small mammals will feed on them, because at an outbreak point, they’re a huge abundant food source, and very easy to pick off,” she said. “Also, by defoliating branches, they create light gaps, which allow the understory to build up and that is more beneficial for deer habitat and browsing.”

Graham said the team plans to return to the affected areas next year, to keep an eye on the damage and see whether the outbreak is under control.